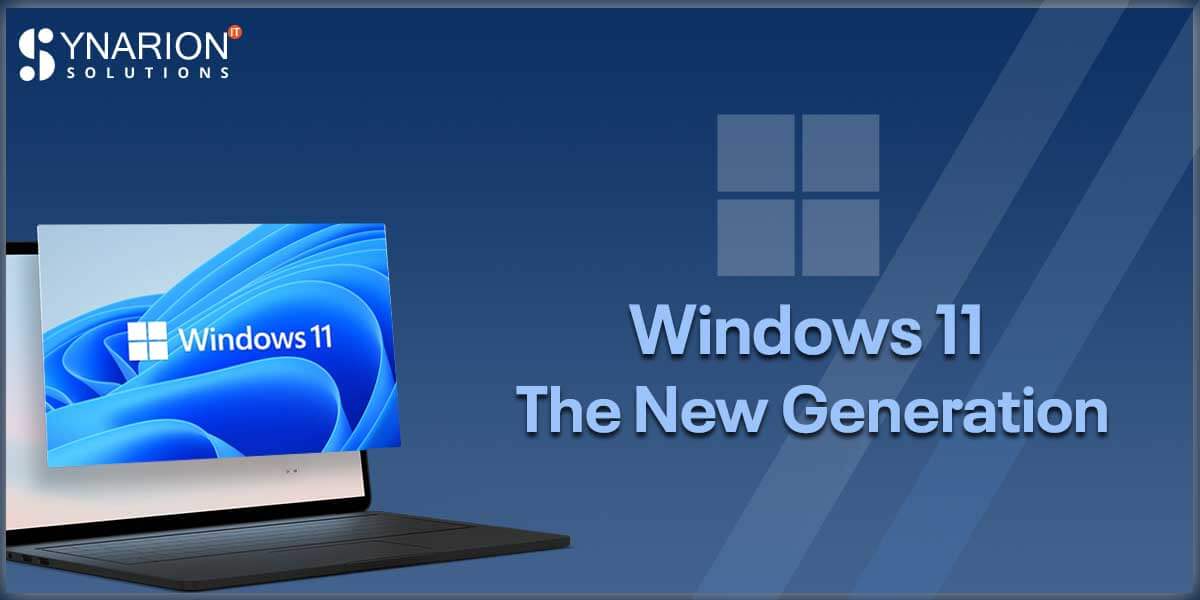 Windows has always existed to be a stage for the world’s innovation. It’s been the backbone of global businesses and where scrappy startups became household names. The web was born and grew up on Windows. Windows is the place people go to create, connect, learn, and achieve – a platform over a billion people today rely on it.

Windows 11 was unveiled on 24th June 2021 with a new interface, app icons, and a centrally placed Start menu. The rollout is expected to begin by December ’21 and will come pre-installed on new PCs. Microsoft has also unveiled the feature update plan for Windows 11 every year. It has been confirmed that only a single Windows 11 big feature update will be rolled out annually, whereas regular monthly quality updates will be provided for security and bug fixes.

What about Windows 10 users?

From a hardware perspective, Microsoft confirmed that it has worked with all major silicon partners, including AMD, Intel, and Qualcomm, to ensure that Windows 11 can be deployed on most devices out in the market. However, the minimum requirements for Windows 11 are not as lightweight as Windows 10.

Different flavors and release policies for them

Here are the best new Windows 11 features we’ve seen announced so far and how you’ll use them, based on what Microsoft has confirmed –

Windows 11 also gives you a more natural way to connect with friends and family through Teams, allowing you to instantly mute and unmute or start presenting directly from the Taskbar.

Windows 11 unlocks the full potential of your system’s hardware, putting some of the latest gaming technology to work for you like;

Nothing has changed in hardware compatibility – Windows 11 supports your favorite PC gaming accessories and peripherals. With Xbox Game Pass for PC or Ultimate, gamers get access to over 100 high-quality PC games with new games added all the time, and it’s still just as easy to find people to play with, no matter if they’re playing on a PC or console.

Even when we’re most focused and creative, we still need breaks – a moment to check in with the outside world or give ourselves a mental reset. Now, you can open a similarly curated view directly from your desktop.

When you open your personalized feed, it slides across your screen like a sheet of glass, so it doesn’t disrupt what you’re doing. For creators and publishers, Widgets also opens new real estate within Windows to deliver personalized content. Microsoft aspires to create a deep pipeline for global brands and local creators alike in a way that both consumers and creators can benefit.

Soon people will get various third-party apps like Microsoft Teams, Visual Studio, Disney+, Adobe Creative Cloud, Zoom, and Canva in the Microsoft Store – all offering incredible experiences to entertain, inspire and connect. When you download an app from the Store, you have the peace of mind of knowing it’s been tested for security and family safety.

New windows pumped to announce that we are bringing Android apps to Windows for the first time.

Windows 11 is secure by design, with new built-in security technologies that will add protection from the chip to the cloud while enabling productivity and unique experiences.

Windows 11 provides a Zero Trust-ready operating system to protect data and access across devices. Microsoft has worked closely with various OEM and silicon partners to raise security baselines to meet the needs of the evolving threat landscape and the new hybrid work world.

And with Dell, HP, Lenovo, Samsung, Surface, and others, working to ensure most PCs you can buy today will be ready for Windows 11 – across various form factors and price points.

Windows 11 turned to be optimized for speed and efficiency and take advantage of improved experiences with touch, inking, and voice.

It also enables haptics to make using your pen even more engaging and immersive, allowing you to hear and feel the vibrations you click through and edit or sketch.

The feature automatically switches between higher and lower refresh rates depending on what is on the screen at any moment, lowering the frame rate for when you’re mainly on a static page, for example. For instance, if you are using a laptop with a display capable of 120Hz with a Dynamic mode between 60Hz and 120Hz, the display will refresh at 60Hz for everyday productivity tasks, such as email, writing a document, and so forth, to conserve battery life. It will then seamlessly switch to 120Hz for functions such as inking and scrolling.

According to Microsoft, to use DRR, you’ll need a laptop with a display that supports a variable refresh rate (VRR) and a refresh rate of at least 120Hz. Additionally, DRR requires a graphics driver (WDDM 3.0) that supports it (available through Windows Update).

You’ll need to download the Amazon Appstore and sign into or create an Amazon account to get started. Then you’ll be able to search for free or paid apps as you would on any other platform. Android apps will be integrated into the Start bar and appear on the Taskbar with their windows.