Why You Should Invest in FANTASY GAMING?

Why You Should Invest in FANTASY GAMING? 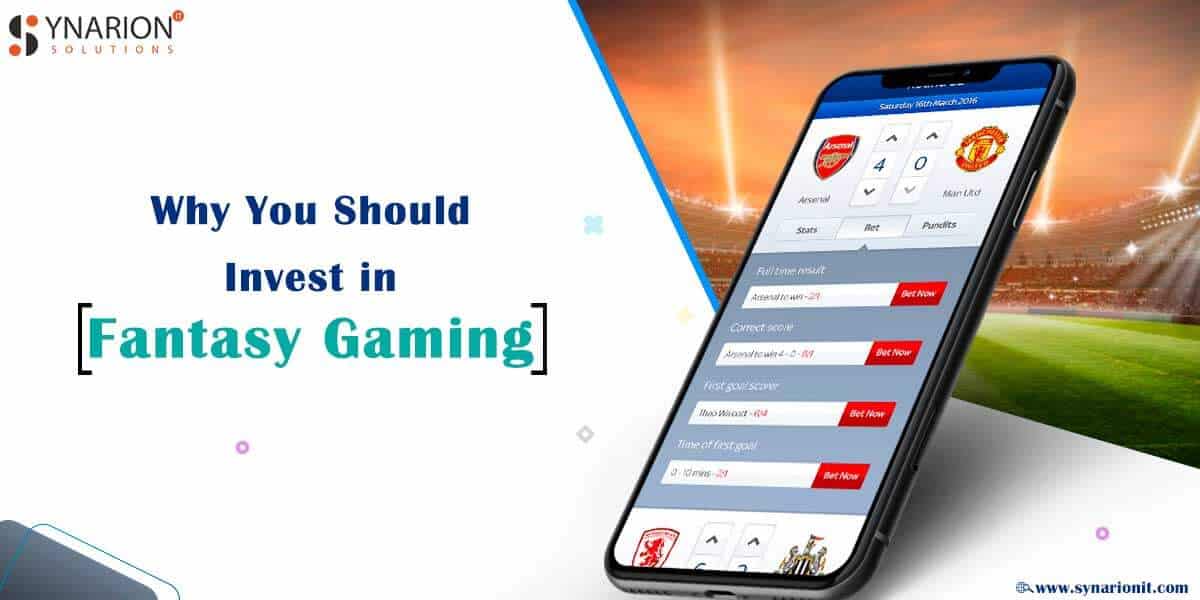 Fantasy gaming is a kind of sport, played online where each contestant forms a virtual team of real-world players from two real teams opposing a professional sport in the real world. The participants’ teams then fight with each other based on the statistical performance of those players in the real game. This performance is changed into points which are compiled according to a record selected by each fantasy team’s supervisor. Just like in real games, in fantasy games too the team owner is the one who plans, deals, and drops the players. It tests the understanding of the obsessive fans, which anyway uses a lot of their time reading about these games, players and analyzing them. This gives a channel to all that knowledge they possess. It also creates competition with millions of others, Winning money, also has its own delight, something on which all these apps depend on.

Despite the fact that fantasy gaming has been around worldwide, it is comparatively new in India. As we are aware the public was deprived of cricket throughout the pandemic, this is why they are all over the apps like Dream 11, and companies are also spending fortunes on anticipating the demand.

In India, there are at least 40 apps, including dream 11, My11Circle, HalaPlay, Paytm First Games, etc. Whether fantasy sports are a game of expertise or a game of luck has been debated by investors and lawyers. Many states of India consider it legal except for some states such as Andhra Pradesh, Assam, Odisha, Telangana, Nagaland, and Sikkim. The appearance of India as the ultimate destination for fantasy gaming is triggered by the digital uprising. There has been an astounding increase in the amount of smartphone and internet users in India in the last decade. similarly, the ascend of league-based games like IPL, T20, BBL, Barclays premier league, etc have furthermore attributed to the incredible growth of fantasy games.

In provisions of profits, the fantasy gaming market has shown an implausible annual growth. The fantasy gaming market reported a gross income of 920 crores in 2019 which raised to 2400 crore in the year 2020. The Indian fantasy sports industry is on the rise with a CAGR of 32%. This expansion seems even more remarkable when compared with the growth of the online gaming industry of India, which is anticipated to grow at a CAGR of 22.1%. The online fantasy gaming market of India is estimated to be worth 2800 crore by the end of 2025. There has been a tremendous boost in the number of fantasy sports users in India, from 20 lakh in 2015 to 9 crore in 2020. This extraordinary growth was backed by significant overseas investments in fantasy games in the country. The FIFS reported investments of approximately 1500 crore from 2018 to 2019.   The main rationale following such enormous investments in the fantasy gaming market is the range of avenues of profit it provides.

Now that we are completely certain that the app will never be out of business, let’s further make sure why you should invest in a fantasy gaming platform and how much profit can you make. Fantasy apps let users enjoy the game better and make a profit from their favorite players’ performance. It is not just money but also your business identity that will enhance as you make your mind up to enter the play stores with your own fantasy gaming app.

Sports players or leagues and fantasy sports platforms have an extremely mutually advantageous association. Fantasy platforms are recognized for their user commitment and extraordinary game indulgence. They are efficient in catching the eye of new customers. For this reason, the game’s classes furthermore consider this to be one of their dynamic sources in growing popularity. By putting capital into these fantasy platforms, you will surely get an opportunity to make organizations with these leading leagues as well. It will not just augment your brand worth but also will facilitate you in receiving a huge client base. The combination of real-life sports with virtual sports helps amplify customer engagement and player appreciation. For example, the famous fantasy cricket app Howzat announced its joint venture with cricket legends Irfan Pathan and Kumar Sangakkara just prior to the Indian Premier League season and it proved to be a brilliant move for both the app and the players.

As we have discussed, the initiative of the Fantasy sports arena is absolutely novel in the Indian market. There are only two powerful organizations that are doing immense in this industry. The likelihood of your choice to invest in this business, at this point of the year is best, as you will not get into a lot of rivalries. Furthermore, it will build the probability of getting more clients and will make sure about your essence in the market.

A report shows that nearly 53% of fantasy sports players open the fantasy sports apps more than once a week. This means that fantasy platforms are providing advertisers with occupied spectators whose interests are already mapped due to their fondness to play fantasy sports. Many companies are partnering with brands and are making fortunes with this opportunity.

After a long journey, at last, fantasy sports got legal in India. The Supreme Court of India has proclaimed this proposal as a round of skills and not gambling.

Fantasy sports platforms are known for giving a real-time experience to their customers. Ease of access of smartphones to everyone has set off its requirements even more. India has become the subsequent greatest hub for fantasy sports after the United States. The business has equally seen rapid progress in its developers. In 2016, there were just 10 developers, up till now in 2021, there are more than 150 developers. These facts are enough to indicate the intensifying interest of the Indian market, thus, instigate investment today and obtain evident superiority in the gaming business.

The bulk of fantasy games are real money games. Users give an entry fee to join a match and that money goes to the prize collection. The prizes are endorsed to the winner’s account at the end of the game. These platforms generally charge a service fee on prize money, which makes them extra lucrative than the majority of the supplementary businesses in India.

in view of the fact that fantasy gaming apps are not restricted to any specific league they have an extended audience. With a massive target audience, you certainly can get enhanced downloads and elevated profits. The correct approach and the accurate marketing tactic will take you to the summit of your business.

From this adequate list of reasons, you will definitely be able to make up your mind on why you need to move ahead with investing in fantasy games. With these great income streams from fantasy sports, there should be no uncertainty that the potential of fantasy games in India is brilliant. So, in case you wish to develop a fantasy gaming app, then you won’t find a better time than this. If you are all set for the investment and are confident about how to invest then get in touch with us at [email protected] to get a free quotation for app development and get your product in the market at the earliest possible.