Unreal Engine Vs. Unity : Which Game Engine Will be Best for You? 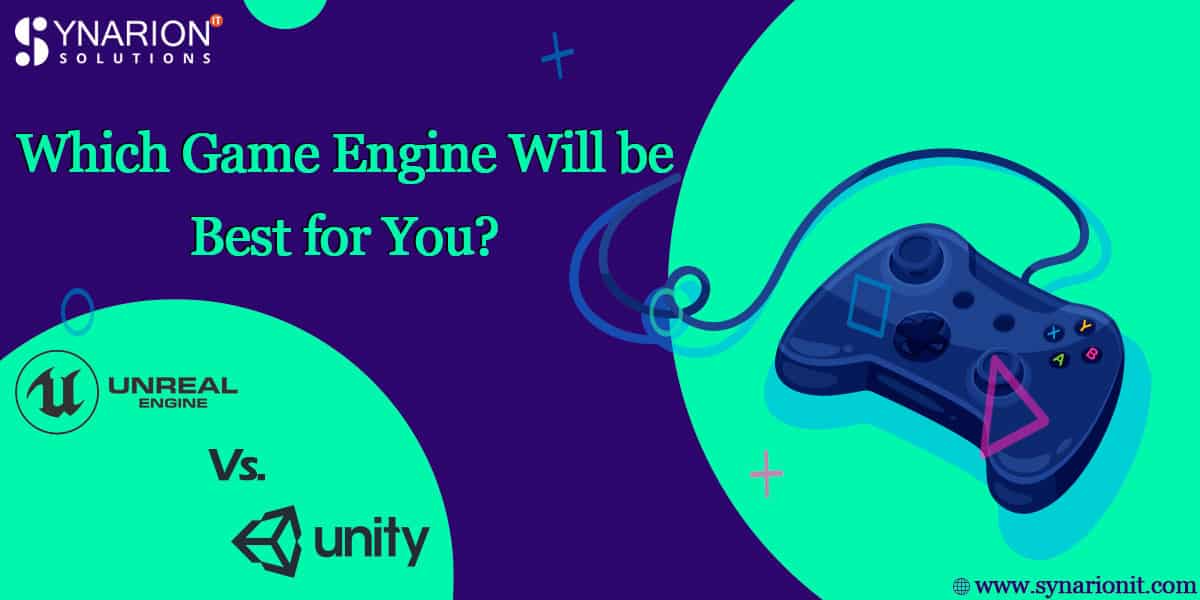 Unreal Engine Vs. Unity : Which Game Engine Will be Best for You?

The gaming industry is rapidly growing and turning widely popular across the globe. In the market, several advanced features and trends have been introduced by the experts, which offer interactive and engaging experiences to the users.

Undoubtedly, with the advent of technologies, such as 3D visuals and high-resolution images the gaming experience has been redefined by the developers. Now, online games are not boring or based on simple user interfaces. With the high-level UI and UX components, the experience has transformed and offered next-generation user experience to the users.

In-game development, developers have to focus on several processes, and to launch highly engaging and interactive online gaming solutions, it is important to think about different processes which include tools, and game engines.

When it comes to game engines, unity and unreal engine are the popular gaming platforms, which helps to enhance the gaming solution. Apart from this, they both have their own features that attract programmers towards them to utilize all the processing of these engines. It is important that developers should be able to choose the right platform for their game-based development solution. In order to leverage all the benefits of the game development service, partner with a game app development company.

In this blog, let’s know which is the best game engine for gaming solutions among unreal engines and unity. Here explore some of the best differences of the game engine.

Unity is based on the cross-platform based game engine. It is developed by the popular Unity technologies and first released in June 2005 at Apple Inc’s developer’s conference. It is written in C++ (runtime), C# (Unity Scripting API). The best part of this platform is it offers 2D and 3D advanced gaming experiences to the users.

According to Wikipedia, Unity is a cross-platform engine. The Unity editor is supported on Windows, macOS, and the Linux platform, while the engine itself currently supports building games for more than 25 different platforms, including mobile, desktop, consoles, and virtual reality. Platforms include iOS, Android, Tizen, Windows, Universal Windows Platform, Mac, Linux, WebGL, PlayStation

It is known as the most powerful 3D creation platform. It is based on advanced real-time 3D creation sources of game development. According to Wikipedia, The Unreal Engine is a game engine developed by Epic Games, first showcased in the 1998 first-person shooter game Unreal. It is written in C++ and launched by Epic Games.

Difference between Unity and Unreal Engine

Unreal Engine – If you want to leverage all the benefits of advanced technologies including 2D and 3D animations with special effects then Unreal engine is the best choice. It is an industry-standard tool, which offers an immersive experience to the users. Its upgraded version is also about to launch with quality execution of lighting and a high-quality experience with the motive to provide an immersive virtual world.

Unity – Unity is a versatile engine and also turning as a staple platform for app developers. It is for the flash games, for flash programmers it is a one-stop choice to launch the solution in the market. This is a popular and powerful platform to deliver highly engaging games. It offers a wide range of development options. This is also best for the developers who want to launch their game with 2D. It also offers easy-to-use and compatible tools to the programmers which are based on easy-to-use attributes.

Unreal Engine – Both the platforms have high support of the community.  But when it comes to comparison, then it would be not wrong to say that Unreal Engine has extensive support from the developers as well as a robust community of users. It has a very active community.

Unity – Unity also has strong support, and developers also share specific ideas like offers ideas on the creation of games.

Unreal Engine – The major thing that matters in the development process is your budget. If you have a strong budget and prefer to include all the advanced trends then Inreal is the best choice to go on.

Unity – If you prefer to launch the gaming application with 2D and as per the market requirement at an affordable price, then Unity comes into the picture. With Unity, you can also get the modern tools and can also leverage their benefits.

Unreal Engine –  Unreal platform uses Blueprint, Coding is the most important part of the development process. Unreal developers can take full advantage of the Blueprint. With this, they can also write code without having the actual script.

Both Unity and Unreal are popular and have created a high buzz in the industry. They both have their own features, pros, and cons. Above we have clearly defined the major differences among the two of them and also have provided in-depth information so you can choose which is better for your game app development process.

If you have any queries about your game app development?  – Connect us