Top 10 online games which can boost your business

Top 10 online games which can boost your business 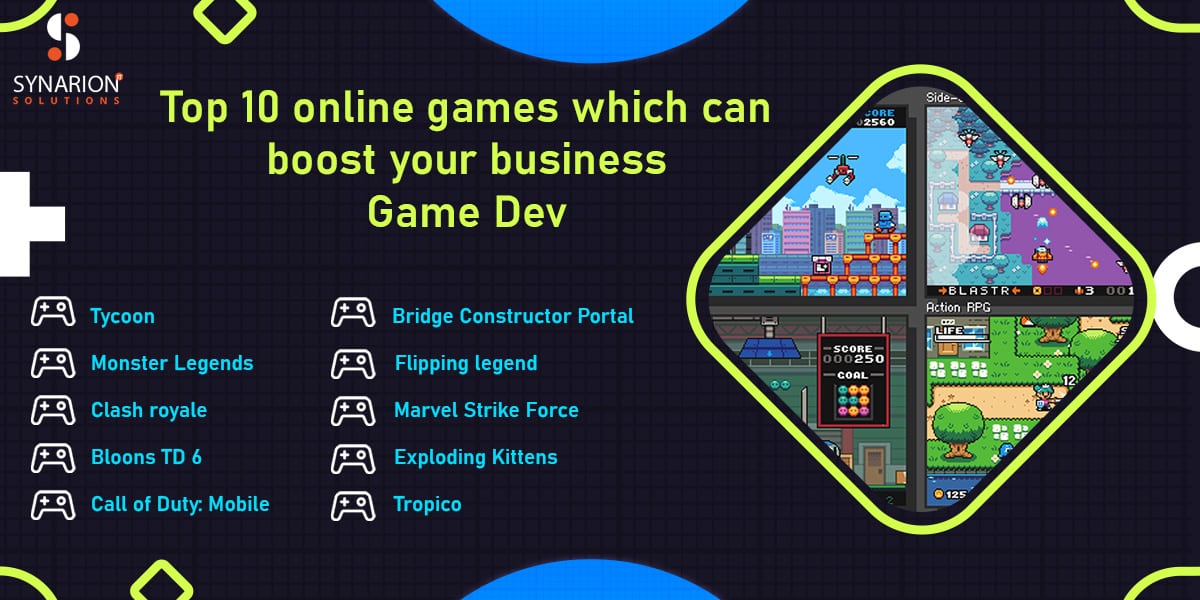 Mobile gaming has evolved much more quickly than any technology that came before it. Each year, Android games seem to reach new heights. With such a multitude of great Android phone games in the Google Play Store, choosing what you should play will prove to be very difficult. Don’t worry, we’re here with our top 10 online games hand-picked list giving you a boost to your company. Some are free, some of them cost a few bucks, but they will both keep you amused at home or while you’re out.

Game Dev Tycoon is a simulation video business game developed by Greenheart Games which was first released on 10th December 2012. Video games are generated and produced by the player in the game. For hit games, you’ll be able to move into an office, recruit designers and creators to help you, and create bigger and better games as the industry matures. It’s a simple idea, but an entertaining one, and you’ll be easily enraptured by stories about how well your last games went, and how the next smash could appeal to even more people. $5 seems like a lot, this is a game you will dive into for several hours.

Bridge Constructor Portal is an engineering simulation and puzzle video game created by ClockStone and has been published by Headup Games. The game is part of the Bridge Constructor sequence and combines elements of the Portal sequence of Valve, which takes place at Aperture Laboratories. Though $5 is a lot of money for a game, it’s a value-filled idea, with 60 test chambers bridging, and GLaDOS’ original voice talking to you via the tutorial. For puzzle lovers a must-buy.

Monster Legends is an addictive game created and released by Social Level, Monster Hunter, Construction, Practicing, Breeding, and Role-Playing. The game provides fun gameplay and is accessible on Smartphone Devices for playing. Create your menagerie, introduce different creatures and prepare them to become the best they can be. A growing organism wants a specific ecosystem, so as it evolves it can adapt to improve.

Flipping Legend is a gameplay tap running on a pattern-based model of gaming. Introduced in an era when flash gaming was the new trend, the first flash games focused on trends rapidly established a devoted and committed player base via innovative gameplay, which was highly addictive. Unlock new powerful characters and unlock their skills while revealing the really strong soundtrack in the game.

Clash Royale is a video game developed and released by Supercell on a freemium real-time strategy. The game incorporates elements from card games collectible, tower defense, and the online fighting arena multiplayer. This game, based on Clash of Clans characters and minions, pits two players in a head-to-head battle, using spells, creatures, and minions to destroy the towers and castle of their opponents. You can collect and upgrade a huge range of units and spells as you gather more and more, making them increasingly effective.

Marvel Strike Force is FoxNext’s turn-based tactical role-playing game for the Android and iOS platforms. The game was released on March 28, 2018, worldwide, and is set primarily in the Marvel Universe, challenges you to gather all your favorite heroes, marshall them into a squad, upgrade them, and lead them to victory in a single-player campaign and battle against other teams.

Bloons TD 6 is great for people who just want to lose hundreds and hundreds of hours in a single game, finding total mastery. If that sounds like you, you’ll love it. Otherwise, it’s a good tower defense game for the less obsessed and that’s nothing wrong with it.

If you are a fan of tower defense games, where bad guys invade your map around a predetermined route and you need to erect destructive towers to wipe them out before they kill you, then you owe it to yourself to buy Bloons TD 6.

Exploding Kittens is a game of cards crafted by Elan Lee, Matthew Inman from The Oatmeal’s comic site, and Shane Low. Proposed initially as a Kickstarter project targeting US$ 10,000 in crowdfunding. Exploding Kittens is a smart combination of tactic and chance, which is similar to Uno which Russian Roulette’s lovechild. It’s better played with a group of mates in multiplayer, but there’s also a single-player option if you need to train, or just want to satisfy the itch.

Call of Duty is a computer game series for first-person shooters published by Activision. Starting in 2003, it first concentrated on World War II sports. Over the span of time, though, the franchise has had games set over contemporary days, in the middle of the Cold War, dystopian environments, and outer space.

You can personalize loadouts, list them, earn prizes, and more. But the quick, frenetic, fulfilling gameplay and the fantastic visuals that combine to make this the best smartphone shooter around right now, are more relevant than all that.

Tropico is a simulation video game on building and management produced by PopTop Software and released in April 2001 by Gathering of Players. Feral Interactive has produced and released a variety of games in the Mac OS X series. The games see the player playing the part of “El Presidente,” the dictator of a fictitious Caribbean island nation during the 1950s onwards Cold War period. Games that are not just the normal casual games on the Play Store can be hard to find so Tropico’s addition was really welcome.

We’ve informed you about 10 games here today to improve your company. With the help of the Mobile Game App Development Company, You can get develop similar games for your company, too. There are several mobile game app development companies in the Gaming Market that offer resources for online game creation.