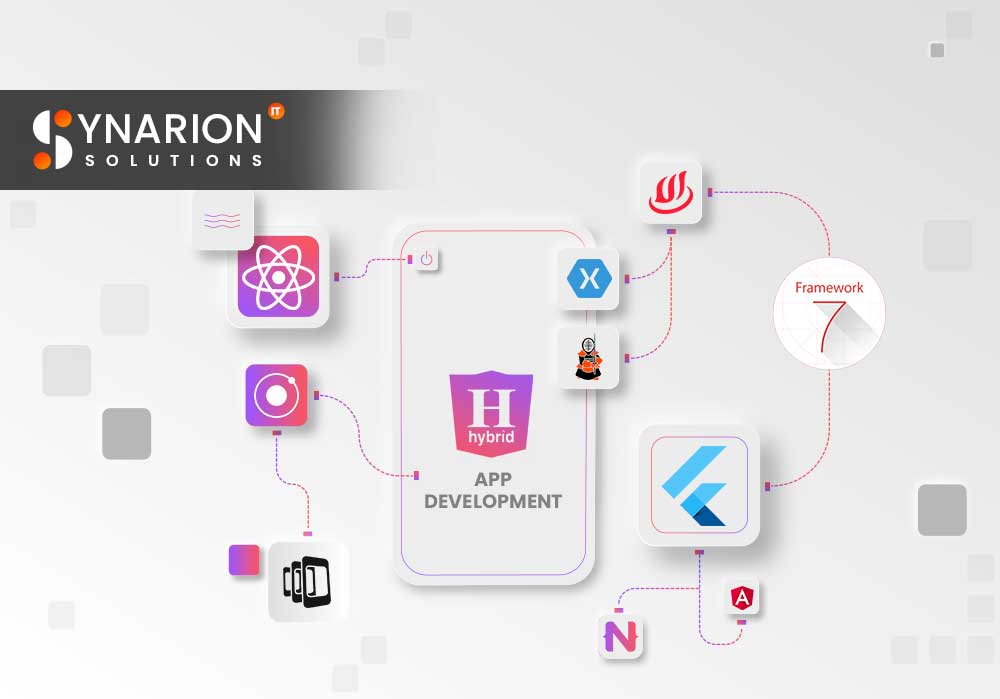 Given the statistics presented above, it is no wonder that the mobile app development industry is booming and generating billions of dollars in income for the various mobile app developers. With our 5+ years of experience in Hybrid app development, we can certainly anticipate that this flourishing market will not slow down shortly and will undoubtedly be a profitable enterprise for many businesses.

However, if you’ve opted to create Hybrid apps, the most critical aspect of the entire process is that you’ll need a high-quality and advanced mobile app development framework to develop hybrid applications. As a result, you must select a mobile framework that meets your needs.

However, choosing a mobile app framework might be difficult, and you may become confused. As a result, here is a list of the best hybrid Mobile app Frameworks in 2023 based on functions, features, and user experience to assist you in selecting the proper Framework for your hybrid app development project.

It is a cross-platform app development framework. Flutter apps use their UI language and rendering engine to provide a native-like look and feel. Flutter apps are often produced in the same amount of time as those built in an existing framework, but they are faster because they are based on the efficient toolkit GTK+ 3 that you already use. This language introduces its own Dev Tools, which merge code editing, inline debugging, and virtual instruments into a unified experience that works on Android and iOS devices.

You can also code in various languages at the same time using our Dart language or choose from thousands of third-party plugins to increase the functionality of your apps, such as analytics tracking or voice interaction.

React Native is a framework developed by Facebook. It is capable of developing apps for both Android and iOS platforms, making it an excellent fit for the mobile-first market. Because of its unparalleled usefulness and ease of use for customers, it is an ideal mix for app development.

React Native enables developers to create native-like online applications. By designing an app that works across platforms, such as iOS and Android, you will be able to reach millions of prospective customers with React Native. This is due to its unifi core, which allows it to work with platforms such as Facebook, Instagram, Skype, and many others.

Ionic is the most popular and preferred framework for hybrid app development. It is an HTML5 mobile app development framework with native-style UI elements that construct unique applications using CSS, Javascript, and HTML.

Ionic is a framework for creating hybrid mobile apps. Ionic includes a strong collection of advanced capabilities such as mobile components, interactive paradigms, typography, and an adaptable base theme that makes the job easier.

Angular is also important in improving the performance of Ionic applications. Because Ionic is built on Angular, it includes pre-made Angular components that match the application’s native appearance and feel.

The disadvantages of utilising Ionic

Xamarin is a cross-platform hybrid mobile app development software for iOS, Android, and Windows that is built on the.NET Framework. It was released in 2011 by a software company and was eventually purchased by Microsoft in 2016.

Microsoft made the Xamarin SDK open-source and integrated it into the Xamarin Visual Studio IDE. Xamarin works in a managed environment, which offers benefits like trash collection and memory allocation. Xamarin may be used to create fully native mobile applications.

In Xamarin, there is a C# codebase that has access to all of the native SDK’s functionality. It also saves time and money during the app development process.

The disadvantages of utilizing the Xamarin

Framework7 is a free and open-source HTML framework that can be used to create hybrid mobile and web applications for iOS and Android devices. It was first introduced in 2014, and the most recent version was released in 2016 under the MIT license.

Framework7 is well-known for making web development more agile. The most exciting aspect of Framework7 is that, unlike other hybrid frameworks, it does not rely on other tools such as Angular or React. This Framework allows you to construct native-looking web apps, progressive web apps (PWA), and iOS and Android apps.

HTML 5 mobile app development framework that combines AngularJS and Bootstrap. It contains many components and UI elements with customizable functionality, allowing it to produce a high-quality mobile app equivalent to a web app.

It is simple to create hybrid apps using Mobile Angular UI since it uses Bootstrap and AngularJS, both of which are simple to learn and use.

Telerik founded Kendo UI, an open-source JavaScript library, in February 2012. It is the most dependable option for developing Angular professional applications.

Kendo UI is a JavaScript tool that contains all the tools needed to create quick, rich, interactive, and responsive online apps in a single package. The UI supports Angular, jQuery, React, and Vue.

Kendo UI includes a library of over 110 UI widgets. It also has AngularJS and Bootstrap integration, making life easier for front-end developers.

PhoneGap is another popular tool for hybrid mobile app development. Because it is mobile-centric and open-source, PhoneGap app development produces robust and feature-rich hybrid applications that perform quickly across numerous platforms and reach a broad audience in less time.

PhoneGap was first referred to as “Apache Cordova” by Nitobe Software. Later, in 2011, Adobe purchased Nitobi and rebranded it “PhoneGap.”

PhoneGap will be an excellent choice for creating a simple online application with the feel of native apps. It is also a very cost-effective choice if you want to save some money.

Onsen UI is a free and open-source UI element framework that can be use to create Progressive Web Apps (PWAs) and hybrid apps. Because Onsen UI is framework-agnostic, developers can develop apps with or without JavaScript Frameworks.

Onsen UI is ideal for creating hybrid apps using Cordova or online apps. It uses web technologies such as HTML5, CSS, and JavaScript, and all of the animations in Onsen UI are adequately tuned and work well on various devices.

NativeScript is a JavaScript framework that is open source and use to create cross-platform apps for Android and iOS. It was create by Progress and eventually transferre to the studio.

NativeScript enables the creation of mobile and web apps from the same code base. Other frameworks use Cordova to render a web-view-driven app UI. NativeScript, on the other hand, causes the UIs to use a Native platform rendering engine, assuring a native-like user experience and performance.

This Framework allows developers to create hybrid apps using CSS, JavaScript, and XML, and it also supports other frameworks such as Angular and Vue.js.

Creating an app can be exciting and lucrative, but it can also be time-consuming. It’s critical to select the correct Framework for your project and have a plan for project management and budgeting. Knowing where to begin with so many distinct frameworks can be difficult. Staying informed is the most excellent way to remain on top of things. You must select the most powerful hybrid mobile app development framework for your needs by following the top frameworks for 2023.