TikTok Mobile App is Planning to Come Back After BGMI

TikTok Mobile App is Planning to Come Back After BGMI 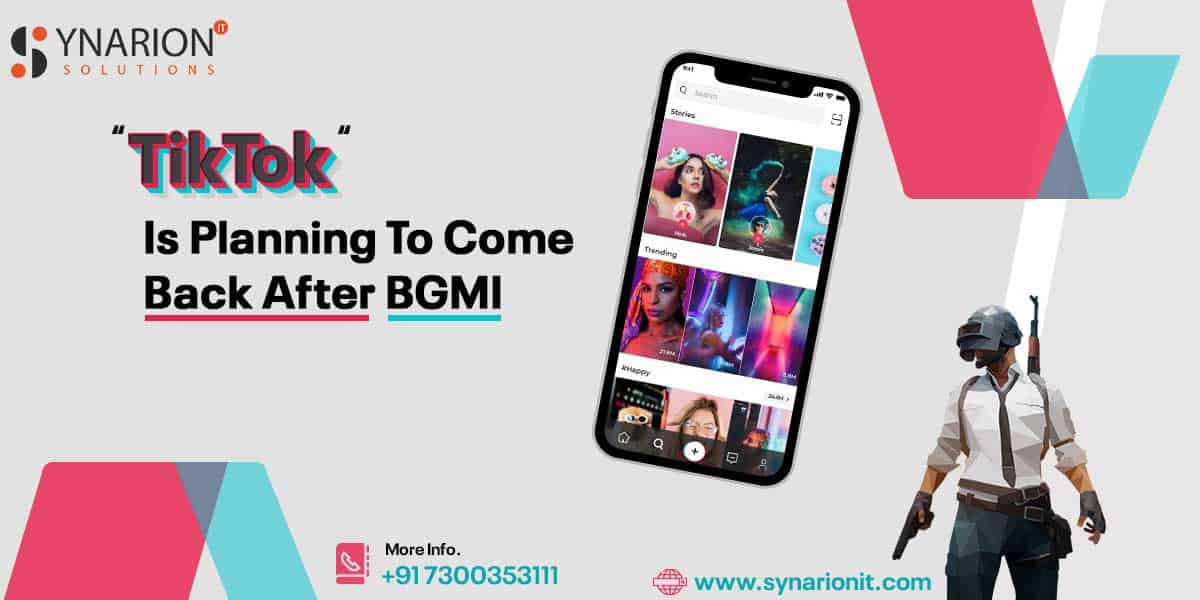 A Summary of TikTok, Its Eventual Ban, And Events Leading Up To Its Comeback

What sets TikTok mobile app apart from other apps is that instead of just being another platform to share media and stories, TikTok allows you to create your own stories. The short videos made off TikTok could be geared towards anything: you’d find videos about cooking or costume designing right after a short video that could teach you how to draw something.

However, the app faced uncounted challenges after the Indian Government, following Article 69A of the Information Technology Act, banned a number of Chinese-made apps and software from the country. This same ban also affected 58 other Chinese apps, including the world-famous mobile game Playerunknown’s Battlegrounds and popular shopping platform Shein.

While this may seem minor, in reality, this was a huge blow for the company, since India was one of the app’s largest user bases with more than 167 million users. Losing India completely meant that their revenue from a lot of sources, especially from Indian advertisers, was cut off, leaving the company stranded without a large part of its previous profits.

Since then, the parent company behind TikTok, ByteDance, has been trying to open communication channels with the Government of India to have their apps reinstated. But as expected, they have found little success, and are instead planning a different sort of comeback for the short-form media app.

Read Also:- How to Get a Fabulous TikTok Clone App Development Online On A Tight Budget

A Deeper Dive Into The Ban of TikTok

Taking The World By Storm

Developed by Zhang Yiming, TikTok was released for the first time in September 2016. The app allowed users to easily make short videos and had a comprehensive selection of features allowing them to customize, voice-over, or even lip-sync to the video.

What nobody could have predicted, however, is that this social media app developed by parent company ByteDance would become one of the hottest apps on the planet almost overnight, and even see massive success in China under the name Douyin.

According to Forbes, the creator of TikTok, a Chinese developer named Zhang Yiming, is worth more than $14 billion now, a fact that makes him one of China’s richest men and TikTok one of the world’s most profitable apps.

Why Was TikTok So Overwhelmingly Popular in India?

Standing as one of today’s largest social media platforms, TikTok has found massive popularity all over the world. In fact, before it was banned in the country, the video-sharing app found more than 167 million users in India, marking it as one of the 21st Century’s most popular apps.

While the same things that made TikTok famous worldwide also applied to India, several factors contributed heavily to the app’s popularity in India, like:

Anybody growing up in India knows the pressure children have to face. With a hard education system, private tutors, and mountains of homework, there’s just no end to the things you have to deal with. The greatest thing that made TikTok so popular with India’s youth is that it gave India’s Gen Z a place to be themselves. The short-form video creating and sharing app encouraged creativity and rewarded the best thing it could: creativity.

While the app itself generated popularity on its own for its novel system, Byte Dance’s marketing for TikTok played a large part in the popularity of the app in India. YouTube Ads, banners, and annotations on other social media, the India of 2017-2019 saw almost nothing but TikTok ads that were designed with a fresh, unique perspective, making them appealing to India’s younger generations.

Instagram is a popular image-sharing app worldwide, and one of TikTok’s best decisions was a partnership with the platform. Now, you could share TikTok’s you made on your Instagram with the touch of a button. This simple move made it even more popular in India, a country that sees high usage statistics on Instagram every month.

Another reason for the app’s popularity was the TikTok trends that regularly swept through the platform. Usually, these were simple things like dance challenges or even lip-syncing perfectly to popular music. The Indian user base of TikTok, consisting mostly of younger teenagers, absolutely loved this feature.

TikTok trends allowed Indian teenagers, who were already living in a country several decades behind international culture, to enjoy doing the same things as their counterparts in more developed countries.

What Were The Major Concerns Behind The Ban of TikTok mobile app?

However, not everything has been rosy for Byte Dance, the parent company behind TikTok. For one, ex-US President Donald Trump threatened to shut down the company after privacy concerns were raised in the White House.

In June 2020, the Government of India banned TikTok outright, along with some 58 other Chinese-made apps. The reason given was that they were found to have been transmitting ‘unauthorized’ forms of data to ‘locations outside the country’.

This is a major concern in and of itself, but another reason behind the ban was the rising tensions on the Indo-China border at Kailash, where the two countries have been in a fierce struggle for control for years now.

The Future of TikTok: Rebranding and Possible Comeback 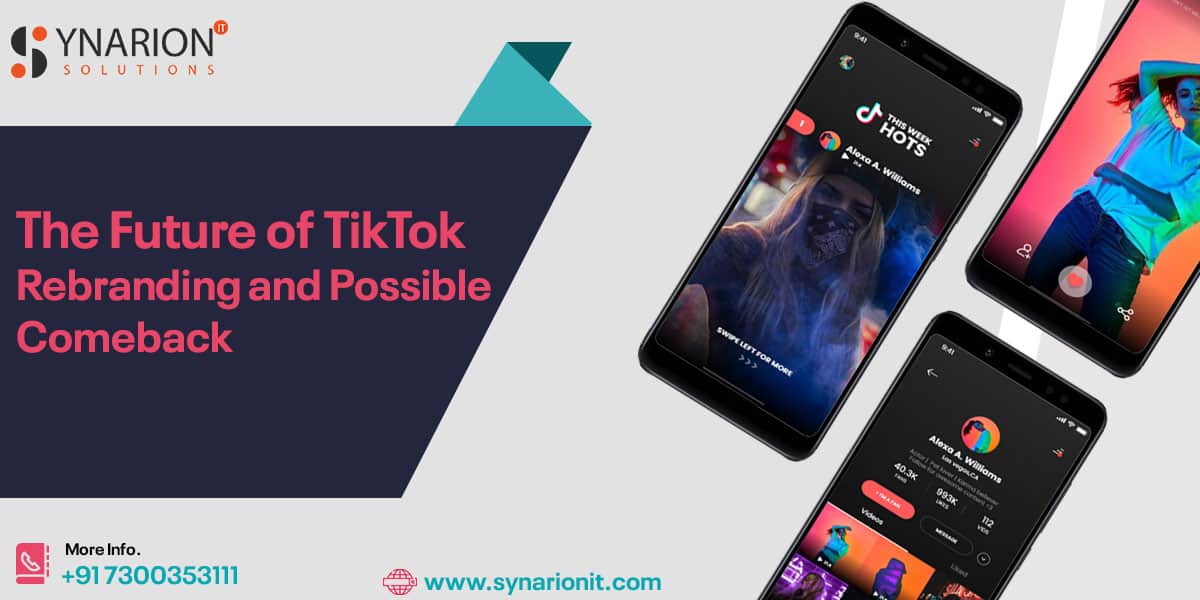 The Rebranded Comeback of PUBG: A Sign of Things to Come

Fans of the video-sharing platform in India were forced to go without their favorite social media platform for a year, but now, they have more hope than ever for a possible comeback of the app.

Playerunknown’s Battlegrounds, a Battle Royale game that rose to become a staple of India’s gaming industry for both mobiles and PC platforms, was also banned from India. The game was developed by Chinese gaming giant Tencent, which means it fell under the purview of the almost blanket ban on Chinese apps and software.

Instead of giving up on the uncapitalized Indian Market, PUBG chose to come out with Battlegrounds Mobile India, a version of the game that was optimized and aimed towards Indian users.

This version of the game was developed by a studio named Krafton. Krafton is a South Korean gaming studio, which meant that Battlegrounds Mobile India, or BGMI for short, was free of the ban restriction on Chinese-developed PUBG. The rebranded game was released on 2nd July 2021, and since then has skyrocketed in both ratings and profitability, as hundreds of thousands of users have come back to the game in droves.

What many people didn’t understand at first go is that the return of Playerunknown’s Battlegrounds as BGMI was only the beginning. Following their example, a number of Chinese-developed apps have found different studios to develop an Indian version of their apps, and some of them, like the Shein shopping platform, has even found partners and integrated their apps into the larger, more popular partners.

TickTock: A Simple Name Change Might Be the Solution

The hope for TikTok’s comeback in India comes from a single thing: according to sources in several locations, online publishings reported that ByteDance, the company behind TikTok, was filing a trademark for an enterprise named “TickTock”.

This was first reported by a tipster named Mukul Sharma, who found out that the filing was made on July 6th, and was made under Class 42 of the Fourth Schedule to Trade Mark Rules, 2002. This means that the app is allowed to be used for industrial analysis and hardware and software development along with designing scientific and technological services.

Obviously, it doesn’t take a think tank to understand the importance of this: ByteDance, months after their defeat at the hands of the Ministry of Information Technology, plans to make their comeback in India, and with something as cheeky and simple as changing the name of the platform!

Following PUBG’s example, many Chinese-made apps are coming back to India, but under new names and titles that don’t fall under the blanket ban on Chinese apps. Most of these apps are developed in studios established by the company in India and use Indian data centers for their services to make sure the same concerns of privacy never rise again.

Conclusion: What Would The Return of TikTok Mean?

TikTok wasn’t just another social media platform. In India, it was one of the most popular ways to spend time, no matter who you asked. It brought people together in an amazing display of the powers of online connectivity, and even changed the lives of many, as a simple following on TikTok could spawn into a career in digital marketing and endorsing products.

The implications of the app’s return, however, are far greater for its parent company, ByteDance, and its founder, Zhang Yimin. India was the largest user-base of TikTok, along with the US, and managing to get back a user base along the tune of 167 million users will propel the company to even greater heights of profitability.