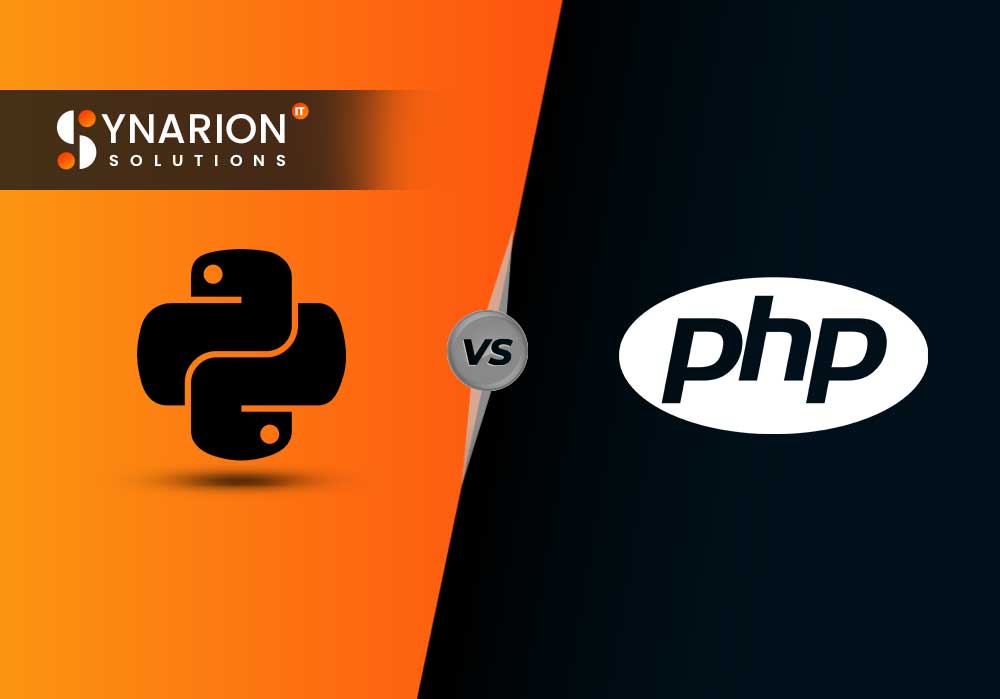 A strong coding language is necessary before any website creation or application. It’s more crucial than ever to select the proper technology foundation and programming language because of the demand to produce high-performing, durable, dependable, secure, and dynamic products. There are high-level coding languages available, each with benefits and drawbacks, such as Java, Python, JavaScript, PHP, Ruby, and others. Most businesses employ the server-side languages PHP and Python, the two most popular ones. As a result, selecting the appropriate programming language for your projects can be confusing. It’s not easy to choose between “PHP vs Python” in an argument.

While Python has slowly expanded over the last two years, PHP continues to power many websites. Before we begin the PHP vs Python comparison, let’s have a general understanding of these two languages.

PHP is a scripting language that is open source and free. The most common usage of this multipurpose programming language is in web development. It was later abbreviated to “PHP: Hypertext Preprocessor,” resulting in a recursive acronym. Rasmus Lerdorf, a programmer who is both Danish and Canadian, invented PHP in 1994. The first PHP version was released in June 1995 by him. (PHP1.0). Future PHP versions have seen significant advancements since then, with PHP 8—the most recent—being released in November 2020. Despite criticism of its design, PHP has evolved to rank among the most popular web development tools. 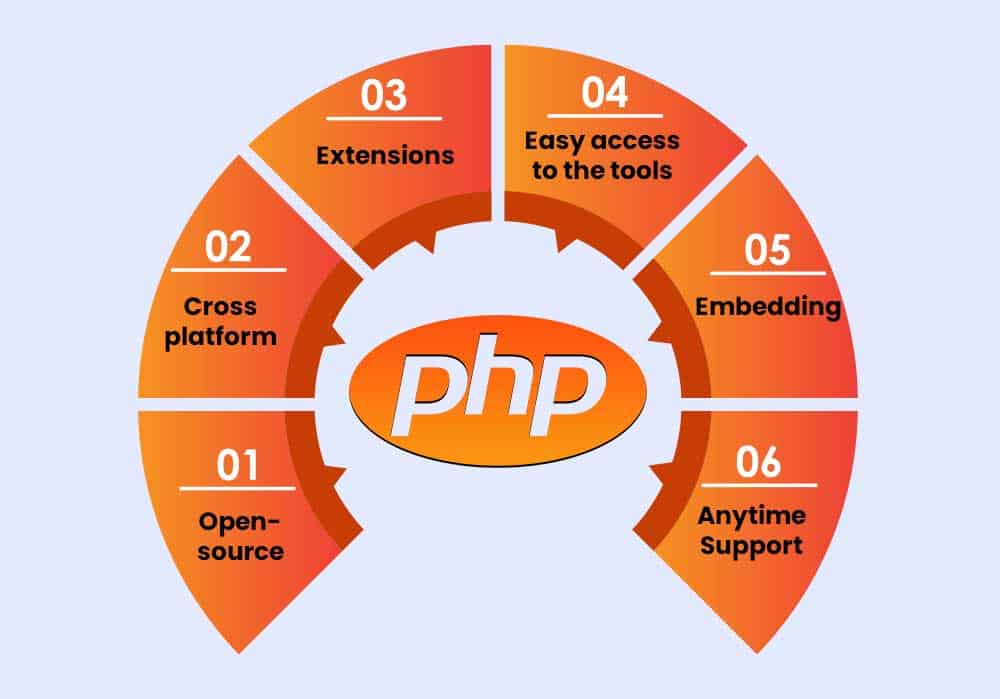 Besides being open source and simple to use, PHP has many unique features. Among its attributes are:

What Does It Serve?

As of March 19, 2021, 79.2% of all websites on the internet used PHP as their server-side programming language, according to a W3Techs analysis. WordPress.com, Facebook.com, Wikipedia.org, Zoom.us, Microsoft.com, Canva.com, Salesforce.com, and numerous other well-known websites use PHP.

Python is an interpreted, object-oriented, high-level programming language. Because the grammar is similar to English, it is accessible to code. Python was developed by Guido van Rossum and made available in 1991. The most recent version and subversion of Python 2 and Python 3 were Python 3.9.2, which was made public on February 19, 2021. Python’s design philosophy strongly emphasises code readability and frequently uses indentation and dynamic semantics. It supports garbage collection, structured, functional, and object-oriented programming paradigms and has dynamic typing. A “Batteries Included” programming language, Python is known for its extensive collection of standard libraries. 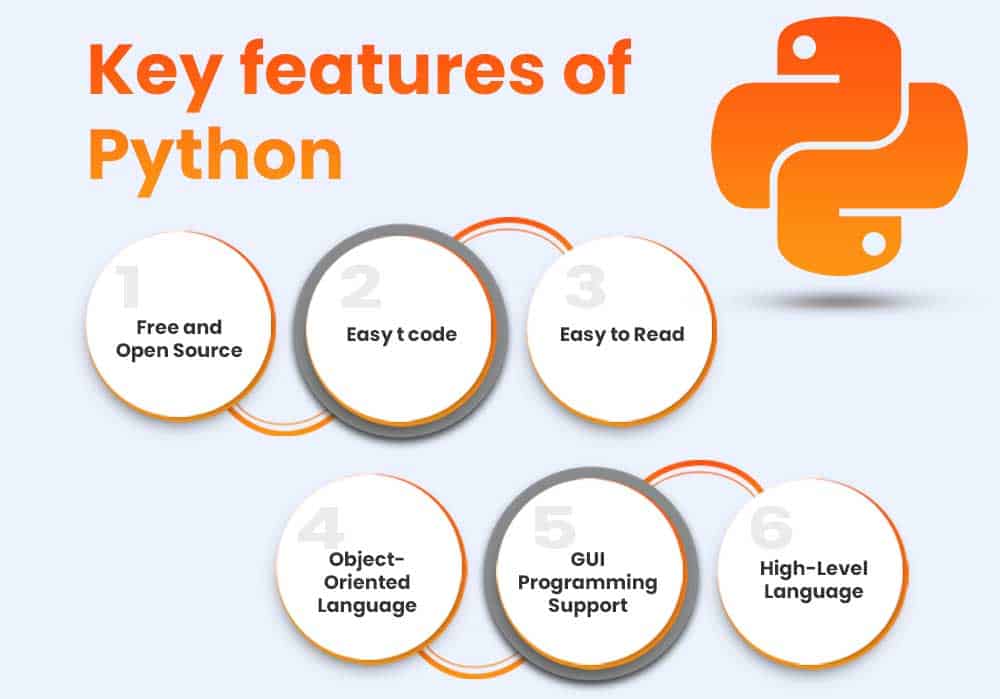 Both are open-source languages regarded as among the simplest for novices to learn and use. Its prominent characteristics are:

What Does It Serve?

Python can be used for numerous things, including:

Python is one of the most significant programming languages for web development because of the wide range of options it offers you. It supports complex CMS like Django CMS and Plone, microframeworks like Bottle and Flask, and frameworks like Pyramid and Django.

These frameworks are adaptable, scalable, and safe and include several standard modules and libraries that help streamline activities like content management and database interface. Additionally, its standard library supports various internet protocols, including HTML, XML, FTP, IMAP, and POP.

Artificial intelligence (AI) and machine learning (ML) initiatives are distinct from those for conventional software models and projects. They also need consistent and dependable language, various skill sets, technology, and tools. Python has these features and the flexibility to fulfil specific project requirements.

People are likelier to adopt Python in their AI and ML projects because of its simplicity, platform independence, extensive libraries, consistency, and active development community.

Python can assist you in creating desktop, web, and sophisticated applications that can perform scientific and mathematical computations.

Python is widely used by developers, including for build control, management, and testing. You can use SCons, Trac or Roundup, and Apache Gump or Buildbot for each of these specific uses.

Others use Python to create games using tools like the Python-based 3D game engine PySoy. For this reason, Python was adopted by video game developers in titles like Battlefield 2, Civilization-IV, and others.

Now that we are fully aware of what Python and PHP are So that you can decide which language is suitable for you and your projects, it is time for us to dive into their distinctions.

Although PHP is not difficult to learn, Python is simpler. Python is a powerful general-purpose programming language that is easy to understand. Python is now the language of choice for many applications since its programmes are significantly shorter and more straightforward to construct than those written in other languages. The syntax is much simpler, and the code is very understandable.

PHP is not intended to be a multipurpose language. It was created especially for web apps, which are unquestionably more complex than straightforward standalone programmes. As a result, learning PHP could take longer than learning Python. PHP itself isn’t incredibly challenging.

The PHP programming language has been around for a long, especially for creating web applications. Because of this, a sizable community of PHP developers may offer assistance.

Here, Python is the same.

It should be remembered that PHP served as the primary backbone for creating Facebook, the largest social network in the world.

Both programming languages have a wealth of documentation. Numerous websites, forums, and discussion boards offer top-notch training on how to create applications with Python or PHP.

Both Python and PHP are open sources and free. Here, both triumph as well. In this case, Python and PHP outperform other, more expensive web frameworks by a wide margin.

This is one area where Python outperforms PHP. For practically all types of applications, Python offers very well-developed library support. PHP is behind her. However, Packagist, the repository for PHP packages, is a solid foundation supporting PHP.

Numerous startups and even major companies are now developing web apps powered by machine learning. Excellent machine learning libraries are available in Python, including TensorFlow, Keras, Theano, Scikit Learn, etc. These libraries are quick and straightforward, but their best feature is how seamlessly they operate with the web framework. As a result, Python makes creating these kinds of apps far easier than nearly any other programming language.

Because it relies on context, this is a tie. The PHP 5. x versions were very trying to use and execute. The newest major version, PHP 8.1, is significantly quicker—nearly three times faster than a typical Python programme.

Speed frequently becomes a crucial issue in applications with high-performance requirements. For instance, a delay of three times could significantly affect the overall system performance in a core banking system that receives a million hits every day. Therefore, in speed, PHP defeats Python by a wide margin.

However, it should be emphasised that the scale is relatively modest for most basic applications. Therefore, there is not much of a noticeable time lag. For instance, given that the application isn’t latency-critical, ten milliseconds and 30 milliseconds are essentially equivalent.

Given that both offer excellent options, Python and PHP are pretty comparable. However, since Django’s development time is short and straightforward to set up, new developers like utilising it.

Django is renowned for being incredibly quick, scalable, safe, and simple to use. It is frequently utilised in various applications and is quite solid and resilient. Similar to how PHP apps today almost exclusively employ one of Codeigniter or Laravel, these two frameworks are quite popular in the industry.

PDB is a powerful debugger provided by Python (Python Debugger). Even for novices, PDB is fully documented and simple to use. In contrast, PHP has the XDebug package for debugging. The most popular debugging tools, like breakpoints, stacks, path mapping, etc., are offered by both PDB and XDebug.

Is PHP or Python simpler?

Despite being a general-purpose language, PHP is excellent for creating more complex web applications. Its syntax resembles Java, C, C++, and Perl. While for loops, if conditions and function returns are similarly comparable.

Variable names in PHP are case-sensitive. It uses a semicolon to end sentences and considers newlines and whitespace like free-form characters. It uses curly brackets, the – > operator, and the prefix $ to denote variables and methods.

Learning PHP and writing code in it takes a while, especially for beginners. However, the development community there is attempting to make it simpler.

However, even for beginners, Python is simpler to learn. This scripting language’s cleaner layout, simplified syntax, and use of plain English words rather than punctuation were all intended to make it easy to understand.

Curly brackets are not used in Python to separate blocks. Whitespace indentation is used as a substitute. This accurately structures its semantics visually. Python has fewer exceptional circumstances and syntactic exceptions and uses semicolons sparingly.

These characteristics make Python coding shorter, easier to read, and easier to debug. Additionally, it allows for error because minor mistakes don’t cause the core codes to break. Python is used in many programming classes to teach the basics of programming to beginning programmers because of this.

To sum up, Python and PHP are comparable in most ways. However, Python prevails in a few crucial areas. Additionally, Python has more career prospects and better median earnings. Therefore, PHP vs Python is a moot point because Python outperforms PHP in many ways. However, this is what we would advise:

We can all agree that Python and PHP are both top-notch programming languages in the end. PHP has long been the language of choice for most web development projects. On the other hand, Python is steadily gaining popularity because of its distinctive characteristics and skills.

Start learning Python if you’re a newbie, and as you acquire skills, go on to PHP or other languages. PHP is the ideal option if web development is all that interests you. However, Python can assist you in getting there if your project incorporates AI, machine learning, and other ideas. Ultimately, it depends on your project’s requirements and proficiency with PHP or Python. In a word, the requirements for your projects will define the programming language. After reading this post, we hope you are more equipped to choose wisely.