Mobile Game Development: An Opportunity You Don’t Want to Miss 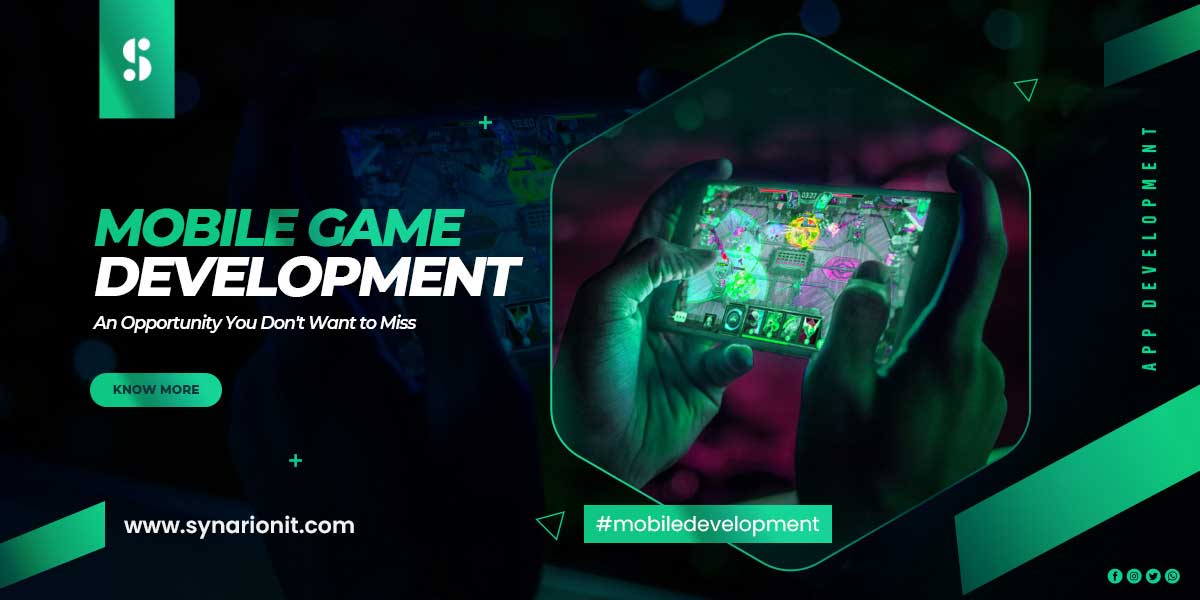 Mobile Game Development: An Opportunity You Don’t Want to Miss

Mobile Games? Are They That Big of a Deal? Let’s say you’re on the bus, or on the train. The next thing millions of people will do is take their smartphones out, so they don’t have to spend the next couple of hours bored to death.

Now, as you might expect, not everybody will be doing the same thing. Some reading enthusiasts will be reading books or comics. Some others will be listening to music and spacing out.

A large majority of people, though, will start up a game. A mobile game was developed by a mobile game development studio over a couple of months.

A mobile game will make whoever provided the initial investment for it rich by bringing in tons of revenue from in-app purchases, cosmetics, and other ways people spend their money on apps.

The Booming Popularity of Mobile Games, A gold mine.

That’s the simplest, most straightforward way we can describe where mobile game development stands right now: A gold mine for anybody with the right idea, the right resources, and just the right amount of effort.

Google Admob, an advertising subsidiary of the Internet giant, says that over 62% of users install a couple of games to help them spend time within their first week of owning a smartphone.

And that was years ago. Today, with the technological and gameplay improvements you’ll see in games, it’s almost impossible to find somebody without a single game on their phone.

The best part is that mobile game development doesn’t cost what people think it does in terms of both time and resources.

A couple of months at the latest and a modest investment coupled with a good idea can result in fun games that make thousands in ad revenue and in-app purchases.

But Wait, Don’t Head Out Just Yet.

But before you go out there looking for a good studio (something we’re going to get into later on), it’s all too common to see people get over-excited and not be prepared for the effort that goes into mobile game development. If you’re aiming for success, you need to be prepared and know the basics of the field.

And we’re not talking about reading up on some common tips and tricks either.

Here’s a collection of what we think are some of the best reasons to get into the mobile game development field while it’s still hot:

The gaming industry began small, with card games like Solitaire and chess simulators with simple A.I., as opponents. It was the smallest sector in the world.

Today, it’s become one of the world’s most profitable, with games for P.C.s and mobiles bringing in prolific revenue streams for studios that play their cards right.

The good news is, it’s not just a persistent market: with the new technology developed every year, it’s an evolving market.

And unless people lose all interest in entertainment, it’s a market that will continue to grow.

2. They Get Mass Coverage Easily

Whether you’re talking about P.C. games or games for consoles like the PlayStation, they cost money.

Some multiplayer games even run on a subscription basis, requiring players to subscribe for a monthly fee. That’s hundreds of people who see the cost and shy away.

Mobile games, however, don’t have that problem, as most mobile games released on the Internet are for free.

Users just have to head to the Play Store (or the App Store for iOS), find a game they like, and download it in seconds.

That’s easy and on-the-go coverage without any effort on the user’s end.

More than 26.8% of the total revenue brought in by the gaming field is through mobile games.

Mobile games have more ways than P.C. or console gaming for users to spend their money, and if all else fails, a mobile game brings in revenue through ad placement.

In-app purchases, loot boxes, cosmetics, new characters, new levels, and even introducing a premium subscription, there’s no end to the ways your mobile game will be making you money.

4. Lower Investment Required Than Games for Other Platforms

Say what you will about mobile games, but the fact is, when you compare them to P.C. games or console games, they’re cheap.

And that goes both ways: mobile games usually cost much, much less than P.C. games to buy.

If you’re thinking of hiring a mobile game development studio, that will work in your favour as you’ll be able to get your game idea made into a reality for actually pretty reasonable costs.

To help you out, we’ve assembled a step-by-step guide to creating a mobile game, beginning with the most obvious step:

1. Get a Great Idea for Your Game

This one should be a no-brainer for everybody.

A talented game development studio can bring life to any vision, but you need an idea to work off of in the first place.

An idea is the very foundation of your game. The more attractive your concept, the better chances your game has of coming to attention quickly.

But this doesn’t mean you’ve got to develop a complex Fantasy story or create a sci-fi world of your own on the spot.

Maybe try a different spin on Board Game development (like one of the many successful grid matching games you’ll find on the Play Store).

2. Build a Story Based on Your Idea

After you’ve come up with an idea, build up a story around the setting or the character(s) you’ve envisioned.

Like we said before, it doesn’t have to be complex. It can be a run-of-the-mill damsel in distress story, but there’s one thing you should keep in mind: It should never, ever be something generic.

Give your players an objective to achieve, like reaching the bad guy’s castle, but put your own spin on it. It’s your idea, story, and game, so remember that you have complete freedom here. If the idea isn’t totally ridiculous, try pitching it to the development team!

A game concept works off the following four points:

For First-Person-Shooters, it’s to shoot somebody and match tiles for, well… Tile-Matching games.

Instead, the game’s setting refers to its environment and story, combined with how the game looks and feels.

Essentially, it’s everything that makes up the user experience. Take the help of a top mobile game development company when deciding on this part!

A little side note here: many people developing a game for the first time feel like they should clutter the screen up with lots of displays.

Don’t do that, please.

4. Choosing the Platform for Your Game

This one’s something that needs a lot of thought. In short, you have two choices:

Both options have their advantages and disadvantages. We’d suggest talking it over with the development studio you hire.

However, we do have some tips.

Android’s the easier option, but there are loads of Android apps just cluttering up the Internet. That means your app needs to stand out more.

On the other hand, the App Store (iOS) has been known to randomly reject apps because of security issues.

We did want to say that instead of limiting yourself, hire Mobile game development for Android and is to ensure your game gets as much coverage as possible!

The game engine is where the real magic happens.

It’s where your idea is turned into a reality, with custom graphics and effects, and sounds applied to a game design platform for the best Action game development.

There are many choices available, but if you’re a beginner, we’d recommend one of the following:

The Mobile game development company will also choose a backend language to design the game on, like C++, NodeJS, or Python.

Also called “documentation” in many places, the game design document is a living document that contains all the details about the games.

The setting, the story, the ascetics, the visual effects you’ve decided to use, the sound files you’ve chosen, everything goes into the game design document.

Since it’s a dynamic document, feedback can be given whenever required, and changes can be made as and when needed.

7. Developing a Game Structure and Then a Prototype

Mobile game development doesn’t count what developing a P.C. or console game does, but it still has a substantial investment.

This means there are no do-overs with game development. The finished product is what you get.

That’s why it’s essential to first make a prototype to see how the game looks and feels.

This is where you can make any significant changes needed to the 2D,3D game development or go for a completely different idea overall since you haven’t put in much investment.

8. Fleshing Out the Game

If you find that you like the prototype, it’s time to start developing the game itself. That means fleshing out the game with the right graphics, sounds, and effects.

As you might expect, this is where the real challenge lies.

It’s essential to hire a Top mobile game development company that does the tasks carefully, as errors remain as bugs in the final version.

But even the best studios can’t always pay attention to every single line of code.

Since your game will represent both you and the studio, you should test your game over a period to find any bugs and glitches left in it.

You can hire testers or even launch an open beta and invite players to play the game and report any bugs they find.

10. Creating or Choosing a Monetization Strategy

At the end of the day, you’re developing the game to be a revenue stream. That means you’ve got to decide how to facilitate this income.

There are lots of ways, but to help you on your way, we’ve collected what we thought were 5 of the most straightforward monetization strategies:

The more famous your game, the higher ad companies will be paying you to let them advertise on it!

A premium version could provide subscribers with an amount of the game’s virtual currency and some in-game items and cosmetics every month.

For these, you want a high-rated Board Game development studio.

You make money by making players buy tokens to play the game with and earn a percentage of the funds made thereof.

Providing Support After Launching Your Game

Unlike what every other site would have you believe, developing a game doesn’t end after launching it. If you want your game to retain its players, the Mobile game development services also have to provide support to solve issues players face.

Support also comes from a continuous stream of bug fixes and content updates, so your players don’t get bored doing the same thing.

All of that might sound easy at first glance. Still, in reality, most of those steps take years of training in game development, not to mention in-field knowledge of where to get animations, sound effects, and other such things.

If you don’t want to be dealing with everything by yourself, our advice would be to hire a mobile game development company. But remember, before hiring any specific studio: you’ve got to compromise between being economical and hiring based on performance.

That means hiring a studio with great reviews, but one that provides their service at reasonable rates!