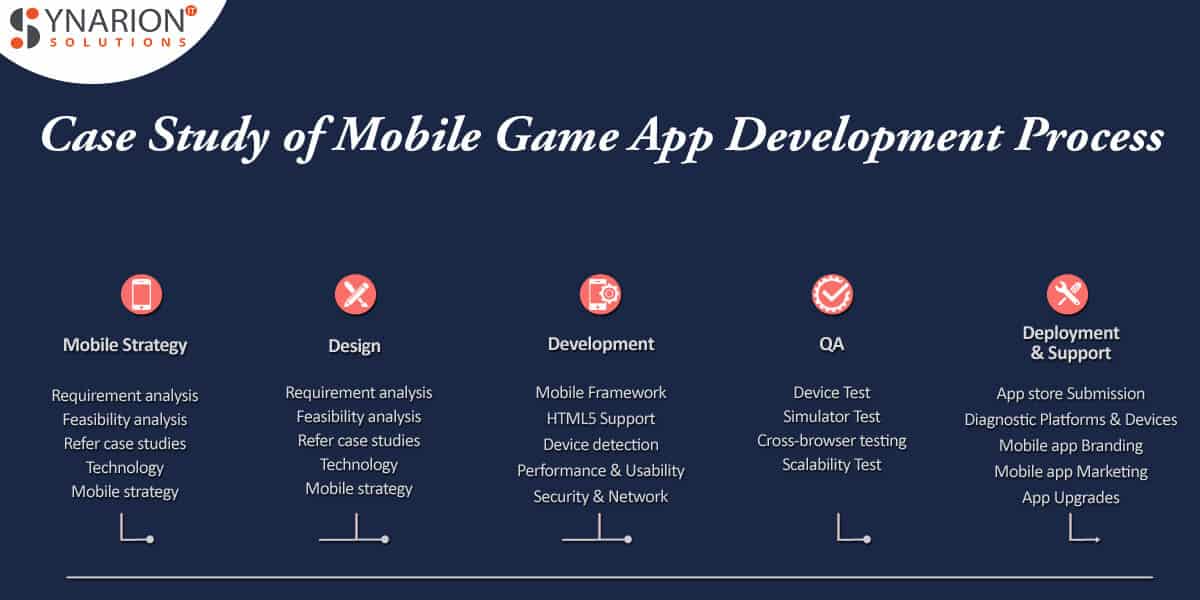 Over the years, the use of smartphones is growing at a rapid pace. The latest mobile technologies have proven to be the biggest blessing for mankind around the globe. It has made our life simple, easy and hassle-free but also affects the various aspects of life. From professional to student, all are looking for mobile game app development for making their life entertaining and stress-free.

Nowadays, there are varieties of mobile applications available that are gaining huge popularity and set tremendous benchmarks in grabbing the attention of users.

If we talk about the present time, there is one popular application available name “Tik Tok” this mobile application is only for entertainment and you won’t believe there are millions of users and every day its users are growing.

The growth of mobile apps not only limited to entertainment apps but also Mobile Game Apps are gaining huge popularity from the last couple of years.  Have you heard about the Game “PUBG”? If not, we will tell you about its popularity. The Most Popular Mobile App Game “PUBG” has gained huge popularity and millions of users download and play daily. This popular mobile game app development is possible using the technologies Java, Python, Pearl 6, Unreal Engine 4 and others. This game is successful and becoming the trending game due to its graphics and real situation where the map and mission are assigned with more enemies hidden in the bushes.

Mobile Game App industry is huge and growing daily, it’s something that will grow with time.

According to Mary Meeker Report, the number of hours spent on the internet is growing each year. Only thing is changed, users are spending more time on mobile apps than desktop. In 2016, Americans were spending 3+ hours per day on mobile and 2.2 hours/per day on desktop or laptops. These stats are growing for mobile and but for desktop it’s unchanged. So, we can take an idea about the popularity of mobile app development in the coming years.

According to Statista, the number of mobile app downloads reached 178 billion apps in 2017. This number is estimated to grow in the upcoming years to 258 billion in 2022.

According to Statista, the most popular category on the Apple App Store in the category of Mobile Game App Developers. Nearly 25% of the mobile apps fall in mobile game apps category. Mobile Game Apps are highly popular among iOS users around the globe.

Mobile Apps are expected to generate revenue of $189 billion by 2020.

If you want to develop a successful Mobile Game Application for Android and iOS users, then it’s really necessary to understand the elements of Game App Development. 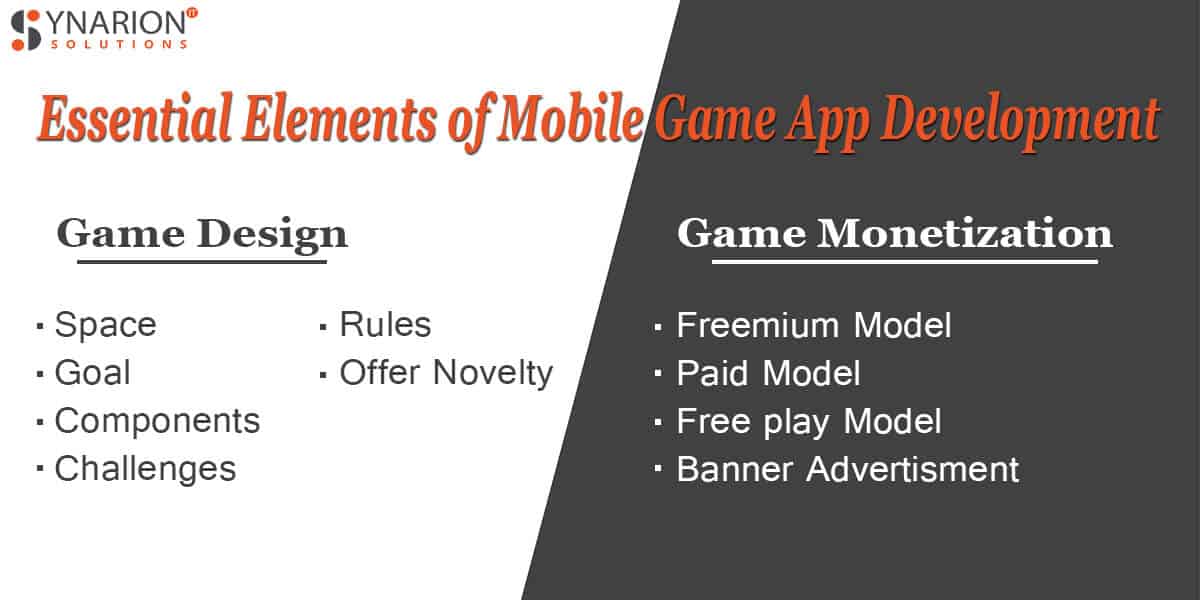 The game industries have been growing in the last couple of years. It’s worth an idea to choose an experienced Mobile Game App Development company for developing your Game Application for Android and iOS users.

Most of the users download Mobile Game Apps but uninstall within seconds, if its design and user experience are not up to the mark.

What are the important Elements of Game Design?

Every Mobile App Game has its own space around which it works. The mobile game space that makes any game hit is lighting, audio, visual effects, colors and sounds. Depending upon the space of the game, Android App Development Companies can choose the character that perfectly suits the game space and fully capable to attract the game players. The game is something that creates a visual world around which player plays the game and escape the reality.

Every game has its set of goals that players achieve at the end of the game. Simply, scoring the highest score in the game without any meaningful goal will not attract any users to play that game again in the future. Creating a game with an appropriate goal that attracts users will be the best part of Mobile App Game Development. Considers all these things before you start the Mobile Game Development Process. It will not only increase interest in the players but also make your mobile app game successful.

Another factor that plays an important role in game development is its components. Adding an attractive component in game-like characters, vehicles, and weapons offer the players the opportunity to play a game in their way. Like, adding different kinds of weapons and vehicles allows the players to select the weapons, cards, and characters of their choice that they like the most. Every component in a game should have a specific purpose in the game.  So, avoid using the components in the game that are meaningless or not fit for the purpose of the game.

The game without a Challenge is just an incomplete game. The mobile game developers can design different levels of the game with different interesting challenges and achievements. It is the perfect way to increase engagement in the game.

In any mobile app game development, rules play a crucial role. Every game has its own set of rules. Do the rules define how the game will work? What players can do? What players can’t do? How to reach the achievement in the game?

Offering something novel to your customer is the great idea to generate interest and excitement among your users, Bring updates to your mobile game app on a timely basis, and it will help you in holding your users for a long time. As they will get every time something new and never get tired of using your mobile app.

Game Monetization is the best way to earn money by a Mobile App Game Development. Making good money was an easy and hassle-free task in the past. Nowadays, competition is very high and you have to understand that what part of the game will make money? Where you have to take your users? To understand the part of your game is making money, you have to properly monetize your mobile game application.

Nowadays this kind of Game Apps is more successful than the instant payment model games. This monetization process takes much time in gaining profit.

In the Freemium model, users can download game with the full version, but they will face some restrictions while playing the game. Like limited weapons, limited vehicles, limited levels per day and others. They are many successful Mobile App Games available on play store who are using the freemium model and gaining huge popularity among users. The best example of a freemium model is the popular mobile app game “Candy Crush Saga”.

The paid model is one of the oldest methods for Mobile App Game Developers to monetize their mobile apps. In this kind of model, you need to create appealing and attractive gameplay and graphics before selling because the user will pay the payment in the starting stage.

Nowadays, this kind of model is less popular among the users and they don’t find interesting in paying in the beginning. First, they want to play and try the Mobile Game app, and then they can pay for it.

Free to play monetization means users can play the game as much as possible but they have to pay if they need to upgrade the game with all additional features. In this model, the developer makes money by selling extra components like weapons, powers or coins.

Ads are one of the best ways to make money simply and easily.  In this kind of mobile game apps, everything is free and users will see some banner ads and pop-ups during the game.  When it comes to banner ads there are so many platforms available that you can use for displaying ads in your games. It’s the responsibility of Game App Developers to show adds that not irritate the users. If ads, again and again, irritate the app users, then might be possible they can uninstall it. So, make use of banner ads and pop-ups in the best possible way, so it will not affect the user gaming experience. 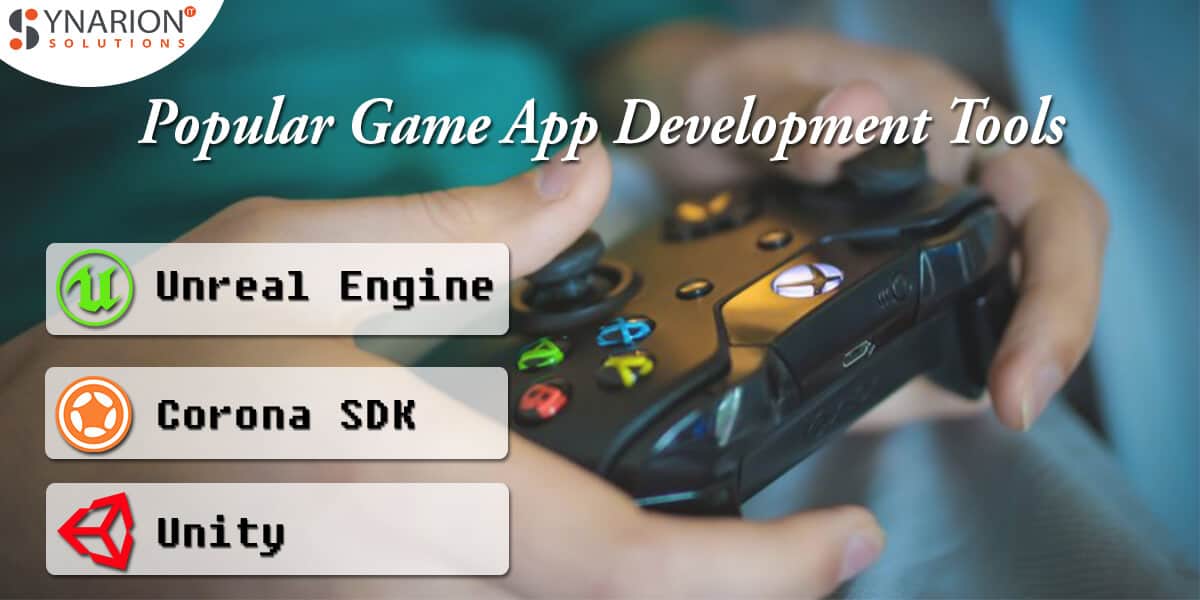 Here is the list of the popular Game App Development Tools that will help you in the software development of perfect Mobile App Games.

The unit is considered one of the best tools for the development of the Mobile Game App. Unity Technologies launched this cross-platform tool, so Android Development teams can build their own mobile games without any difficulties. This popular tool for mobile game app development supports both developments including 2D and 3D games.

Unreal Engine is a popular tool and works on all platforms. You need to pay a charge if your Mobile App Game collected revenue of $ 3000 per year.

The Corona SDK “2 D Engine Game” is a cross-platform tool that uses Lua Scripting Language which is much easier for learning and coding. You can easily use 2D features and plugins available online at Corona Marketplace.

Game Testing is the process to understand the quality of the game, identify game defects and fixing the bugs. It’s really important to understand the quality of the game before the final release of the mobile game app. If your game app will be having bugs after releasing, maybe users once downloaded it and they will uninstall the game because of those errors and bugs. If you want to make your mobile game app successful then test your game completely before it gets live. Game Testing is not limited to only bugs but should be tested for other important features like Game Play, Rules, Features, Sounds, Lights and others.

Game Testing is one of the important parts of the overall Game App Development Process.  This is the final stage that will decide whether your Mobile Game app is ready to launch or still need some modifications.

This process is used to identify the bugs or errors in a game that can affect user experience.

This testing is done to find out whether the mobile game application is functioning properly or not with respect to hardware, graphics, and software configuration for the devices it is built for.

This testing is done to check the performance of the system under real-time loads.

The process of Game Testing Methodology is explained below:

In this phase of testing, the plan needs to be set of the game requirements, game objectives like target groups, complexity and others. The developers can create documents of all necessary components such as features of the game, animation, physics, AI, camera view, user experience that can be improved after the testing of the game.

Before you start the testing of the game, it’s really important to analyze the quality of the game and decide on what parameter games need to be tested. Then, according to the needs of the game developers can further breakdown down game components into small testable components.

After the testing process is done, now developers will make the improvements in those sections where the game is lacking. In those sections, issues will be resolved and then Mobile Game App will be live.

If you’re also looking to develop your own Mobile Game Application, then Hire Mobile Game Developers or Game Development Company that have good experience of developing successful mobile games.