Is Tata Neu Biggest Challenge to Amazon, Paytm, and Reliance Jio? (All You Need to Know) 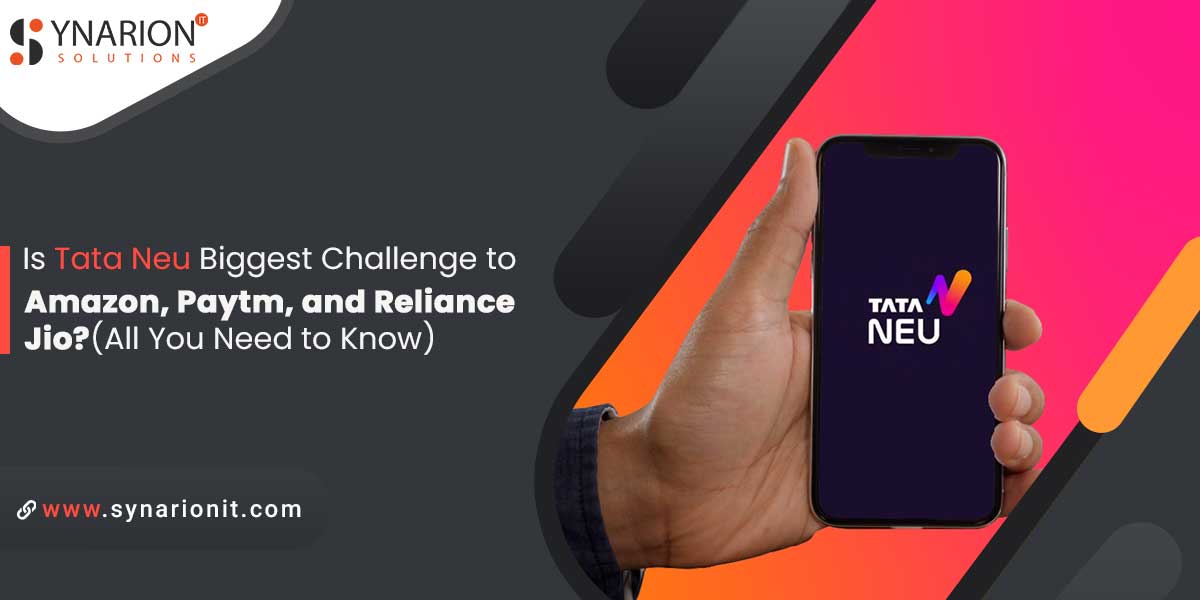 Is Tata Neu Biggest Challenge to Amazon, Paytm, and Reliance Jio? (All You Need to Know)

On April 7th TATA launched a new app called TATA NEU. This app came into the market as the most significant rival to Amazon, Paytm, Reliance Jio, etc. All of these are trendy brands or apps we all know about. These apps help us with our daily life.

These apps or brands are a part of our life. So what does an app do to make a rivalry with all of them with its first launch? But let’s first know about the company that made this app in detail and about those other apps that are also a part of this topic.

AMAZON– This is the name of an application, also a production created by Jeff Bezos. We use this application for buying groceries, shopping, and even making payments. This is the world’s biggest online shopping platform, built on July 5th, 1994.

Amazon.com is a vast Internet-based enterprise that sells books, music, movies, housewares, electronics, toys, groceries, and many other things, either directly or as the middleman between different retailers and millions of customers of Amazon.

The company also makes the market-leading Kindle e-book readers. Its promotion of these devices has led to dramatic growth in e-book publishing and turned Amazon into a significant disruptive force in the book-publishing market.

Paytm is an online payments platform that allows you to transfer cash into the integrated wallet through net banking, debit cards, credit cards, or even depositing cash through select banks and partners. By using the money in the Paytm wallet, you can even pay for many things.

Among the transactions you can make on Paytm are recharges for mobile phones, metro cards, data cards, etc., and postpaid payments for mobile phones, landline/ broadband, electricity, water and gas bills, etc. You can book tickets for buses, trains, flights, movies, hotel room-sand, and many other things here. And pay for an Uber cab for a ride using the platform. Additionally, you can buy goods on the company’s e-commerce platform using the wallet and even make offline payments at over 8 lakh merchants on Amazon.

Reliance JIO– Nowadays, in India, most people use JIO sim. JIO was founded by the owner of reliance Mukesh Ambani 15 years ago on February 15th 2007and also has many other apps like- My JIO, JIO movies, etc., allows us to maintain mobile recharges, bill payments, entertainment, etc.

Now I can think we all can understand how important this application is and how difficult it could be to compete against them. So what does a new app like TATA NEU accomplish to make a rivalry against this kind of market predator?

TATA NEU is a newly launched TATA company owned by Ratan Tata on April 7th, 2022. First of all, TATA NEU is very easy to use compared to those other applications, it provides you with a new system search bar, so you don’t have to work to learn how to use the app individually. So people are hesitating less to use it because it’s not even complicated to understand.

TATA included many things that TATA launched before in this app, like-

BIG BASKET- TATA brought 64% of the significant basket stake on May 28th, 2021. TATA can now take a big part in the online grocery shopping platform from the big basket. TATA includes this trump card in NEU so that it could be a game-changer in this competition.

Croma- Croma is an Indian retail chain of consumer electronics and durables run by Infiniti Retail, a subsidiary of the TATA Group. So you can buy many electronic things for a good deal, and the product quality is also excellent. So TATA also included this app.

TATA 1mg- This is TATA’s medical supply app. With this program, you can order medicines from this at an astounding price. It was founded in 2015. 1MG is a leading player in the eHealth space and enables easy and affordable access to a wide range of products in medicines, health and wellness products, diagnostics services & teleconsultation to customers.

TATA CLiQ- On September 29th, 2021, TATA launched TATA CLiQ. It is an online shopping website. When it was found, it didn’t get that much attention; It could be an expectation from TATA that now that it is included in NEU, it will get the attention it deserves. You can also order food from this app, and it is of good quality. With Tata Pay, one can also make payments across multiple brand apps of TATA, websites, and in-store using NeuCoins, cards, UPI, EMI, and many other transaction methods. By using QR codes, payments in local stores, theatres, chemist shops, or other stores.

But the main attraction of this app is TATA pay _

TATA pay- It is a beautiful brand new launch from TATA. It has a unique 5% reward through NEU coins (1 NEU coin = 1 rupee) offered to every purchase, so we can say it will get a tremendous amount of attention shortly.

In this app, there are also some membership plans through NEU pass. You can get a pretty good offer by becoming a member. It will be great for those who order food every day or shop online—great deals from TATA.

So all over, great effort from TATA. Including all of these options and more in one app is a pretty fantastic deal to pass. SO, TATA is expecting a great deal of attraction in return.

CURRENT COMPETITION BETWEEN TATA NEU AND OTHER APPS

After reading that guess, we all agree that TATA launched a heavy, tough competitor against those market leaders like Paytm, amazon, JIO, etc. TATA’s NEU app will act as an eCommerce platform in the current online market. On top of that, TATA has been a very trustworthy company for a long time in India.

The outer world, too, and TATA chose IPL commercials for advertisement because TATA brought IPL in 2022. So it will be worldwide broadcasting for this app, and it will gain popularity soon. And because of this excellent service from those other apps are fearing NEU for losing their face.

Why do we call NEU a supper app?

TATA’s main idea behind launching the super app is to bring all its brands and services under one umbrella. With a base of 45 million customers spread around multitudes of brands, TATA aims to consolidate them in one place, which could play in their favour. Via its loyalty program for the core customers, Tata seems all set to solidify its position in the consumer-facing business space.

How is TATA NEU Super App different from Amazon, Paytm, and other shopping applications.

The TATA NEU app comes as a one-stop shop for payments, shopping, booking flights, hotels, paying bills, food delivery, etc. The app competes with Paytm, which also serves a similar purpose in transaction parts. The Tata Neu app facilitates all these services via Tata’s ventures like payments via Tata Pay, food delivery via QMin and Starbucks, shopping via Tata Cliq, groceries via Big Basket, Hotels via Taj, and flights from Air Asia, and so on.

The app has been launched for end-users on both iOS and Android. This app is registered in google play and the apple app store. Users can download them from the ether of those apps. The Tata Neu app is an excellent alternative to other shopping and online services apps like Paytm, Amazon, etc. This article will look at how the Tata Neu app is different from the competition in terms of the services it provides and the overall user experience.

TATA has a product stock; all of TATA NEU’s services are through these existing stocks.

The most significant difference between TATA and its competition is that all services are linked to existing Tata products.

What is the USP of the TATA NEU app over Paytm, amazon?

This ease of finding all services in one place from credible entities in their respective categories is a factor that will drive people towards TATA NEU in this competition.

The TATA NEU app also offers reward points on each purchase, and it’s similar to Flipkart’s super coins. TATA NEU explains to customers that every time a customer makes a purchase, they will earn a NEU coin.

NEU coins can be redeemed for equal rupees, so 1 NEUCOIN=1 RUPEE. The company guarantees to reach anywhere, spend anywhere and maximize your savings. Payment apps like Paytm also offer such offers.

The TATA NEU app has an upcoming feature called “NEUPASS,” which seems to be a pass-like service that holds your NEUCOIN and manages your coin inventory, tells you how many coins you have and when existing ones are expiring.

And also tell you great offers that you should take an interest in and great membership plans that will help you save some money and get some discounts on your deals.

The TATA NEU app also has a tab called ‘Stories’ that includes buying guides and stories from IPL. Since TATA is the primary sponsor in IPL2022, TATA uses IPL as the free advertisement platform for the NEU app. It will attract cricket-loving fans very quickly. Under the ‘Flip the page’ option, users can select TATA IPL fever.

TATA gives multiple offers throughout the IPL by making many IPL teams the centre of attention. It is a great marketing strategy. The new IPL 2022 section also shows NeuPass deals, IPL Guides, information like a stadium, and more.

In the heated battle of super apps in India, TATA decided that TATA should also come up with its excellent app against the existing super app giants like- Amazon, Flipkart, Paytm, Reliance Jio, etc.

The company is working hard on an omnichannel digital platform to bring together its various consumer businesses under one channel. “It’s a super app that will gather a lot of words in one app, so it will provide an opportunity to make it grow faster, that’s how they gave us a connection through online experience and at the same time an omnichannel experience?”

So Flipkart, Amazon, Paytm, reliance JIO takes this NEU app very seriously, almost as a threat to the future. That’s why this upcoming battle will be very heated.

All of this quality in one app gives us the idea of how much time and effort TATA spent to build this application, and so this effort paid off. This app is very useful, so people accept it, and it is gaining popularity quite fast.

That’s why all those other apps like Paytm, Amazon, Reliance Jio, and those other apps acknowledge this app’s upcoming rivalry and try to do their best to stand up against the forthcoming battle.

With all that, we can say TATA’s this NEU app will take a big part in an upcoming uproar of the market, and those big companies and we can suffer some losses because of this new app of TATA’s. Whatever happens in the future, TATA produced a very nice app to use which will help us pass through our daily lives.