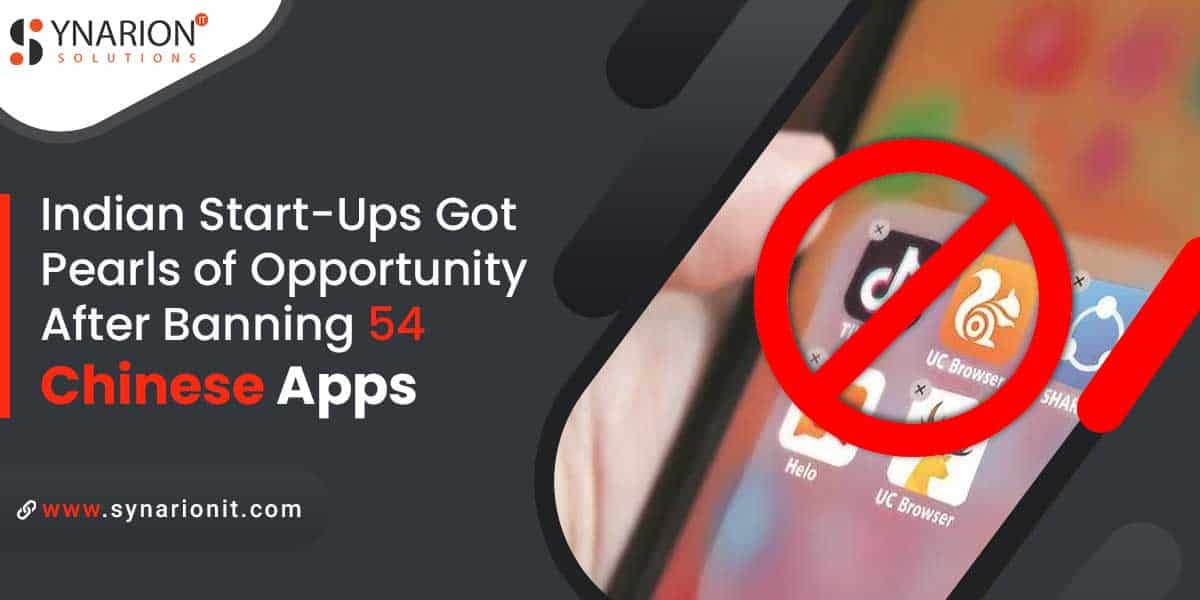 The Indian Government has decided against the ban of Chinese Apps. Many apps are banned after the spread of the pandemic those are in their hands. In the year 2020, the government passed an order that there are apps that is to be banned in India. There are about 224 apps that are banned in the three rounds. Now there is a new order to ban fresh apps that is about 54 Chinese apps. The government of India has claimed the fresh ban that includes the ban of the apps belonging to large companies i.e. Alibaba and Tencent. These apps are banned because they are harming Indian society and its sources.

With this Indians started favoring their products or apps that are home-grown and made them self-sufficient by boycotting Chinese apps at a huge rate. This ban has put the local IT companies with an end number of opportunities and made a huge platform for the IT players to showcase their talents.

ITs always come with many of the technologies in the segments of growth. After the bans of the Chinese apps, many of the start-ups got pearls of opportunity. This has led to the increasing demand for own mobile app development. This made Indian startups with the challenge as bring themselves as the emerging winners in meeting the technological demands for the app users.

Highlighting some Chinese Apps that are Banned in India?

China has some of the prominent apps which are banned in India because it is believed that some of those apps have found be data theft allegations they include:

With the spread of the pandemic, there is a continuous threat of its spreading. This made people spend their most of time on their phones or screens. This has created a zeal for the new start-ups to tackle the Chinese market hold well and launch better offerings than them and stand apart to gain the vast and strong market.

With the banning of apps, the government of India is with the initiative to promote Indian start-ups and make them ready to use their products and services.

Taking this strategy as the base the Government of India and the Prime Minister of India have launched the ‘Aatmanirbhar Bharat – App innovation’. This revolution will speak for itself at an enormous level and is taken to encourage the Indian start-ups and make them self-dependent. The apps include all the categories that you need. To let the start-up jump into the country’s demand it has to go with many of the regulations and legalities.

Chinese apps have secured a huge mass of users worldwide. But the banning of their apps in the Indian and US market lead to their drawback. India was their extremely potential land to make the success. With this response, the Indians started to use their self talent to discover something new and this made them efficient to conquer Chinese apps by bringing alternatives. This has created opportunities for the entrepreneurs for the new startups.

The government of India has announced the strategy of self-reliance which makes India independent and digitally secured. Those apps that have been banned by the government will expand the resources in India and this roving will surely be a potential playbook for many Indians who want to take place on the global map.

This ban has meant to be a marvelous opportunity for the entrepreneurs and motivates them to serve their customers with the best and great product. With this, there is a strong and critical strategy that speeds up innovation in India and boosts the world of ITs and startups.

The Prime Minister of India also talked about the ‘Swadeshi’ i.e. homegrown among the local consumers. This ensures the small entrepreneurs have their platforms and also have the opportunity and responsibility to serve the best to their customers.

The Indian startups’ who have Chinese investors also have a great opportunity to think big and take their business to new heights by holding on own and making it self dependent. If this rare moment has entered their minds then it is a great time to recognize this tremendous opportunity.

How do the Indian Tech Platforms have the Potential to Go Global with this Ban?

The Indian startups are stepping into the global world and filling the vacuums with extreme potential. The government’s decision to ban the Chinese apps has provided the Indian entrepreneurs an immense scope to lead a world of classy solutions by building their digital businesses. The Indian tech companies are with many of the alternative apps that step ahead of the Chinese app market. Some of the apps among them are- Bolo Indya, Mitron, Chingari, ShareChat, Jio Meet, Kaagaz Scanner, and undoubtedly India’s favorite Ludo King. All the startups and alternatives showed that they are the best to go global.

And this step is not far-fetched now and will allow players to spread their wings further in the air by catching this stupendous show.

How did the Indians respond after the ban?

The ban of the Chinese apps has reported that the Indian entrepreneurs are continuously welcoming the new and advanced technologies, different ideas for the eCommerce, IT, gaming, and social media. This ban has proved to be the best in the ecosystem of tech and startups and helps Indian businesses and businessmen. As it is time to build the best for the people of the country.

Everyone knows that there is a huge market for Chinese apps, but Indians can take place by creating some alternatives to those apps and delivering the same features to their apps.

It is a great decision of the government of India as it shows National Integrity and gives a big boost to the morale of the brave bodies’ hearts as they are the only ones who are there to guard our borders at every second.

Indian Startups got funds with the new venture of Facebook

The global giant of social media, Facebook, and one of the top and pinned companies in the technology field has also started to help many of the new startups and entrepreneurs to give the best output. This made Indians get supported with the new startups as Facebook is behind them to invest in their businesses.

The honorable Prime Minister of India Shri Narendra Modi has launched the ‘Digital India Aatmanirbhar Bharat App Innovate Challenge’ on the 4th of July, 2020. This launch is decided to see that there is a huge interest and enthusiasm among the tech ecosystem and startups to innovate and develop by promoting the homegrown apps. This is the challenge to the Indian startups to ‘Made In India’ applications that facilitates the people of the country.

This challenge is launched by the collaboration of the Ministry of Electronics and IT under the ‘Digital India’ mission.

This challenge is with the motive to bring the spirit of confidence and motivation for the Indian entrepreneurs, startups, and techies so that they can create some classy apps that leave behind the Chinese apps that have been banned in India.

We all know today working on the mission ‘Aatmanirbhar Bharat’ is a prodigious slot for the entrepreneurs who are giving their best in the direction of efforts and momentum of the hard work. This evolves the apps which can satisfy the market by competing with other similar apps.

It is proved that the future of the Indian IT sector is taking new steps after the ban on Chinese apps. They are getting a great chance to explore their talents and skills to the development of the alternatives. It is proved to be a good option as the apps are made by the Indians that have the titanic capability and are technologically imaginative.

We all have to provoke those star talents that can emerge as a big center of ‘Make In India’ and promote the homegrown apps.

In the end, I will say that this challenge will definitely motivate many individuals and companies who want to showcase their talents and knowledge to come forward in the crowd and use their brains to benefit the country. We know Indians have the burning potential but they lack to create some superior digital solutions for the people due to their low confidence. But the PM’s launch and the Chinese ban will fire up their skilled talents for the betterment and renouncement of the country. This is also an extraordinary chance for the companies that can launch alternatives to those banned apps. This ban will act as a wariness for all the Indian tech companies and motivate them to work ethically by following all the rules and making them understand that they always have to store the data locally. Lastly, this step is going to prove to be great and works on both the sovereignty and integrity of the nation.