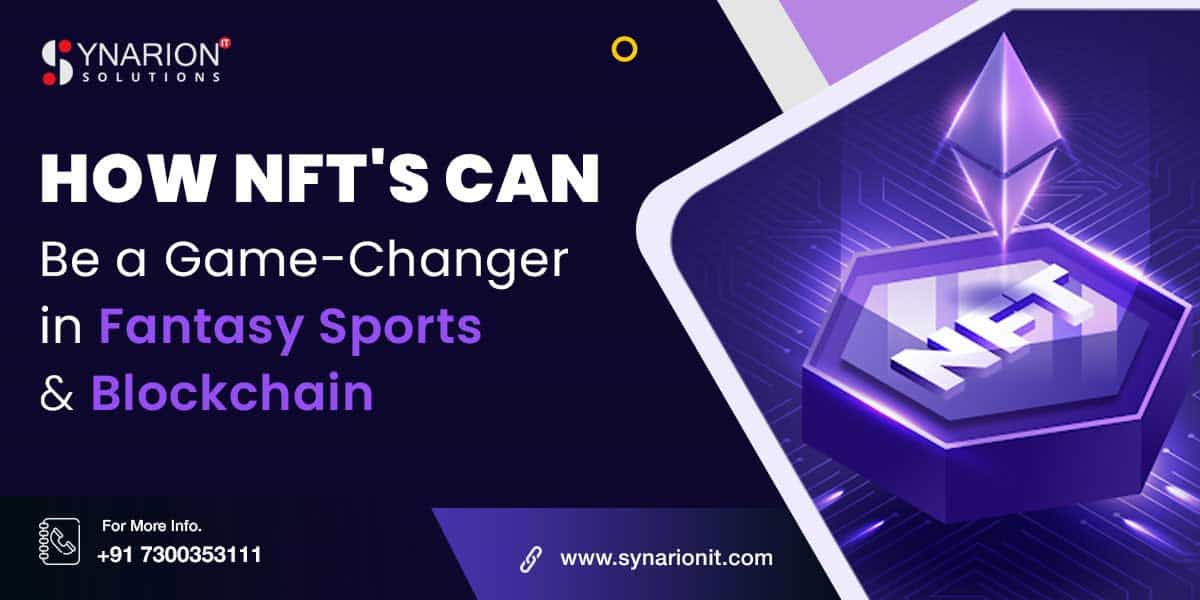 In a way, Fantasy sports have altered how fans watch the sports they love. People often confuse fantasy sports with betting. Betting on games is just a scheme in which persons bet on the outcome of the sports. While fantasy sports is something in which you create a fantasy team of real-life sports players. Then you compete with another user to win cash prizes. This is the way it works and differs from betting. This difference has changed the way the community immerses in sports. And The fantasy sports app developers build incredible applications to attract more and more people towards fantasy sports.

Before We Move Further to See the Effects of NTF’s in Fantasy Sports, let’s Understand the Concept of NFT’s in Detail.

For the people who aren’t quite aware of NFT’s, it is a unit of data compiled on a digital record called a blockchain. This system certifies the digital assets to be unique and therefore it isn’t fungible. NFT’s are used for representing any type of files such as photos, audio, or videos. Although they have been known since 2014, they are gaining more importance in recent years. They have a unique identifying code that makes them different from each other.

In one of his speeches, managing director of yellow umbrella ventures and chair of the Washington technology association, Cascadia blockchain council said “NFTs are essentially creating digital scarcity.” This statement stands in contrast to many digital creations as they have an infinite supply of NFTs. In the early days, NFTs were retained as the digital creations that occurred in the forms of iconic video clips of NBA events or securitized editions of digital art that were already floating over social media such as Instagram.

The full form of NFT suggests that they are nonfungible tokens that mean they can’t be traded or exchanged for one another. They have a special digital signature that makes it almost impossible to be exchanged for something of equal value or from one another. NFTs allow users to possess the original commodity in digital form. It contains a built-in authentication that confirms ownership. These NFTs occur on the blockchain, which is a distributed community roster or file that records transactions. Though all the blockchains support NFTs, they are mainly held on the Ethereum blockchain. They include all tangible and intangible items such as music, designer sneakers, sports highlights, virtual avatars as in video games, collectibles, etc.

These are usually a little complicated to understand. But its core concept is very simple. It’s a type of database which stores databases in blocks that are then connected by or chained together. When the new data comes in it is compiled in a fresh block.  These blocks have a specific storage capacity. As the block fills; it is chained onto previous blocks. This way information is connected in chronological order. NFTS is the latest phenomenon of the blockchain. This then occurred as the mainstream awareness among the people.

Are you thinking of how fantasy sports can benefit from this technology called NFTs?  Most of the systems now will become digitized and will enable further participation of the audiences. Fantasy sports white label

As and when there is a digital scarcity of specific tokens the demand would rise of the tokens and which would lead to the growth of the prices of the specific tokens. This would have made the prices of the token too high to be afforded by the common people. The rise of NFTs in other sectors of gaming and the high prices of the tokens led to the rise of usage of nonfungible tokens in fantasy sports also. These nonfungible tokens can be owned partially. The idea was to make something that can be of less price. So why not something on the blockchain? What if these fungible assets could set the prices and sell themselves by automated liquidity by themselves?

It was then that Trade star inventors came up with the idea of fractional NFT by using ERC-20 and giving the capabilities for NFT to set price and circulate the supply of shares as a market supply and demand. This enables fans to invest in virtual assets as if they were buying groceries. Simply by tracking real-life performances of any sporting event through fractional NFT, they can set up fractional NFTs markets and economic incentives for financing or carrying shares of that NFT. So, basically what starts with sports can proceed to any market where performance can be measured. As a result, The scale plus liquidity could expand substantial value.

The popularity of crypto has increased to a greater extent in the past few years. The expansion of crypto has led to its interest bleeding into the gaming world. The gaming mechanics lend themselves very well to the economics of cryptocurrency in terms of rewarding skills, community competition, investment decisions, etc.

There was a rush in the usage of NFTs when there was the launch of the Top shot NBA’s websites previous October. It allowed users to buy and trade NFTs in the form of minutes in NBA games- video clips of highlights. In this, the one that gained the most popularity is Lebron James slam dunk clips. It is already bought by users for $208000 developing the transactions worth $250,000,000 to the website.

Well, talking about the fantasy world, the global market is composed of many sports such as football,  soccer,  basketball, cricket, etc. The market size of fantasy sports doesn’t depend on the number of fans the sport has in real Sports. For example, Soccer has more fans than cricket. But in fantasy sports, more than 70% of the market in the USA and Canada accounts for the football segments. In the international market, cricket is more popular and is about to grow as fast as 17.9% by 2027 as its popularity is increasing in the Asia Pacific region. Fantasy sports platform development companies facilitate the development of such platforms.

The most recent use of NFTs can be seen in the fantasy football game named So rare. In this basically, the cards of football players can be collected by the users. These cards are then used by the user to create the team and challenge the other users. There are some of the cards which were sold for a very high amount. The digital card of Kylian Mbappe was sold for a dollar of 65,000 in recent auctions. In case you don’t know Kylian Mbappe then for you, he is the forward of the 2020 champions league finalist Paris Saint Germain FC.

Another very popular Trade star started to utilize the technology of NFTs. Trade Star is a fantasy sports app developer where blockchain players formulate and exchange digital assets that depict the actual actions of performers in the real world. It is integrating the development of chain-based gaming with the innate Demand of fiction sports by supplying and creating fractional nonfungible tokens.

This way many other such fantasy sports companies have started the use of nonfungible tokens with the help of fantasy league software.

In the year 2020 fantasy sports had observed a decline in overall interest and participation of the people for all existing leagues. The first reason for this was the COVID-19 pandemic. Another reason for the decline might be that the basic pattern of the game has been the same since the first launch of the National football league in the 1960s by Bill Winkanbach. The winner in the game is only one person then what’s the use of so much research about the player when only one on the board wins the game?

NFTs are the Way to Make Fantasy Sports More Competitive

There’s a website nonfungible.com, this website is responsible for tracing the market, it shows that NFTs have risen from $40.9 million in 2018 to a further $338 million in 2020. That was the result of only 150,000 people taking part in the market. They are expected to grow up to $1.3 billion in the year 2021. This is due to the increase in usage of NFT’s in gaming,  fantasy sports, and collectibles. The people are crazy to invest in games like GameStop- crazed Wall Street Bets kiddies on Reddit. This craze is the reason for Gennie having sold NFTs celebrating soccer star Mesut Ozil for more than $500,000.

Fantasy sports NFTs involve tokenizing stars of different games such as soccer, baseball, etc. Thus the game brings everything to the blockchain. This all becomes possible due to the fantasy sports website development company. The game then allows players to monetize and trade non-fungible tokens.  These are used to represent the real-life performances of the players. This interests the users and impacts the game value. Another very interesting thing about this is that the complete game is completely managed by the smart contracts on the blockchain.

NFTs create several different opportunities for users to play the games. The ability to split the players or fractionalize the player are some of the choices given by NFTs. All the users don’t keep fighting over the single-player such as Leoni Messi in soccer fantasy sports. Instead, users invest in fractions of these players. This leaves users with the wide opportunity to invest in the top performers of real life.

NFT gaming mechanism is not only used to make the distribution of superstars fairer but also makes your stake in each player with intrinsic value. You can also trade these NFT.  This implies that the information of players, games, and teams could mean economic upside whether or not you come on top of the league. NFTs can be a game-changing element and transform fantasy sports. You can get yourself financial rewards just by realizing who you should sell and whom you should buy. The best part about this is that your identity is not revealed. You don’t get exposed to other third parties or any other trading forum/platform. This is how NFTs benefit the users in various ways. The fantasy cricket website development companies develop fantasy websites with such features.

NFTs have their challenges such as not being easy to use or easy to display. But when the iPhone was launched in the market for the first time it was the same situation but now we can see the usage of the iPhone. Same way NFTs will completely change the gaming industry.  A fantasy sports software development company in Jaipur built such software and promote fantasy sports. People spend a lot of money on their favorite fantasy games. When they quit a game their money is gone. This means nothing to them. This implies that people are ready to invest in such games. With the use of NFTs that would not just be spending but investing where they will also gain some returns even if they don’t be at the top. So this changes everything.

It’s obvious that if you find something that has more value, why would you play something that has no value? NFTs will promote people to invest more in such fantasy sports using nonfungible tokens. In the past year’s people were more like serfs and working for real estate. These used to generate money for the companies that launch games but there were no gains for the players. The game kicks out players as soon as he breaks the rule and the player loses everything he had brought in the game.