Build your Business with Fantasy App Development for IPL 2022 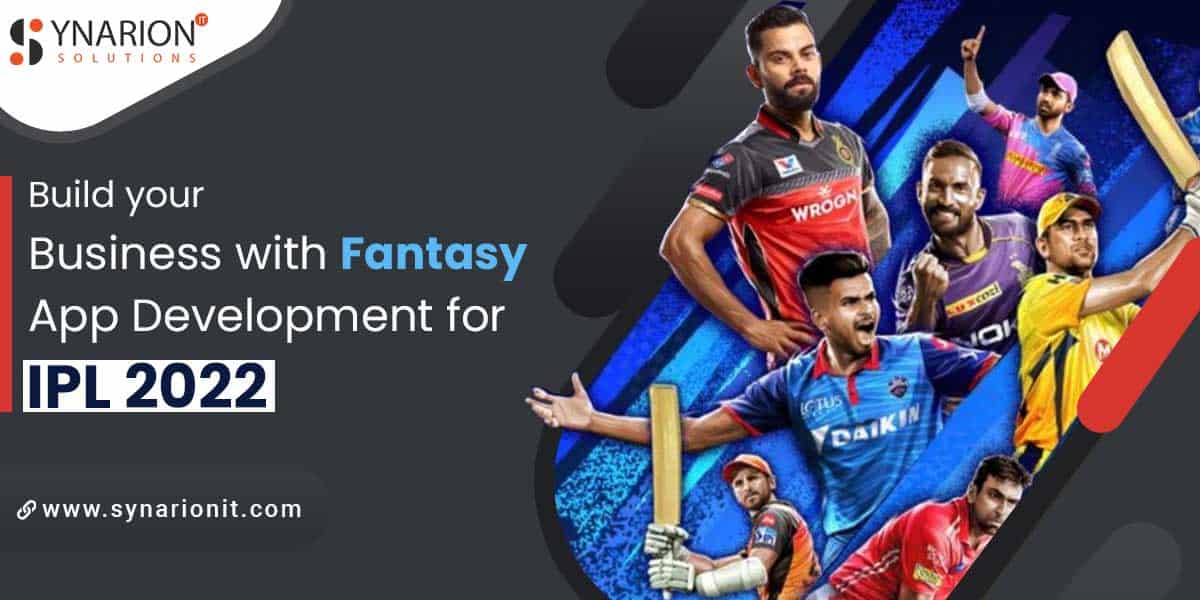 Build your Business with Fantasy App Development for IPL 2022

As we all know that today there is a huge craze of fantasy sports around us. In every corner of the world, there are many sports lovers. We can find different people according to their sports choice among us. No one does not like to play. As Fantasy Sports App Development stepped into the market the crowd get spellbound with that. As they can play and experience real sport just sitting on their sofas which brings them joy, entertainment, and many rewards. This attracts and provokes them to create their fantasy team by having a bowl of popcorn in their hands.

This demand for fantasy sports attracts them towards a great Fantasy App and staunches of the sports which can fulfill their requirement and brings them new and pleasant rewards which generate greed among them to play and win!

So, keeping your interest in mind this blog will surely increase your enthusiasm. As for the cricket fans, there is a piece of great news that according to an IPL Governing Council member, this 15th IPL 2022 Mega Auction is likely to take place in the first week of January 2022 and the game is expected to start from the 4th month of the year, that means this April is bringing our radiant players on the ground of hope. So, what you are waiting for,  just to go to the best app development company and get an enthralling fantasy sports app developed for yourself before the world’s biggest league and enjoy your seat.

There is a huge market of IPL all over the world especially in India which is not lesser than a festival that increases the fantasy app development business. And also brings a huge glee for the cricket lovers as the craze of IPL is not hidden by anybody and this brings a boost among all the genes. Nobody wants to lose even a single match, which sustains the curiosity of the spectators for the teams and the matches.

So, what you are waiting for get a fantasy app developed before the arrival of the world’s biggest league and let your entertainment blew in the air.

What is Fantasy Sports App Development?

Fantasy Sports are bringing dynamic changes in the world of sports which are continuously increasing the demand for fantasy sports app developments almost in every corner of the world.

The Fantasy Sports App Development is an app that allows players to play a fantasy sport by experiencing the game in a real way as it is a platform where online sports are played in which players form a virtual team with real players who were physically present at the game. The users create their online team with the players who are playing in the stadium by using a fantasy sports app.

What is Fantasy Sports Software Development?

Fantasy Sports Software Development is an advanced and enriching fantasy sports software solution with robust and scalable features for fantasy lovers which are made by expert professionals by giving extra attention to details, knowledge, professionalism, with modern trends to make predictions easy and impeccable transactions. All this allows users to play fantasy sports virtually and enjoy every second of the match.

A Fantasy Sports Software Development helps you to develop an advanced platform that covers multiple sports like Cricket, Football, Basketball, Soccer, Baseball, Hockey, and many more.

Fantasy Sports Software Development tremendous growth provides analytics software services that allow you to experience the expertise of the expert developers who help you to provide in-depth statistical fantasy software programs with utmost accuracy. So, get the high functional and rich-featured fantasy analytics software for the real-time team and players tracking applications.

With the change in time fantasy sports world has bought many of the changes and one of the biggest examples among them is the development of Fantasy League Software Solutions which makes full sense of the key components like helping you create your league. Forming advanced Fantasy league software will make full use of these key components like SuperFlex, IDP, pirate league, salary cap, auction, dynasty, two quarterbacks, head to head, all play, keeper style, and daily fantasy sports.

Indian Premier League is commonly known as IPL. It is the world’s biggest cricket T20 league where players from different countries come in a team and show off their talent by batting a ball on the pitch. Nobody is unaware that there is a huge obsession for fantasy cricket players also and IPL is like a carnival for them, where they can earn a huge amount of money. That is why IPL Fantasy League is one of the common mediums where the spectators enjoy using their skills in fantasy apps.

Board of Control for Cricket in India in 2008 announced the first-ever T20 league which is now known as IPL. Even with the emergence of T20 cricket, many IPL fantasy league apps have been launched throughout the world where you can enjoy IPL Fantasy Cricket.

The cricket fans around India are going crazy with the commencement of the 15th edition of the Indian Premier League (IPL) 2022. It is one of the biggest tournaments in India that is known for its glamour as much as it is known for its cricketing action and it immediately garnered huge fan attention. Over the years, the league has been exponentially growing. Today, it is also one of the favorite tournaments of fantasy cricket players.

While the different national and international cricketer joins the eight teams of IPL. The fans play fantasy cricket at home using their skills and knowledge and win multiple rewards like cash prizes etc. You can start creating your fantasy team from the first match of IPL and you can also invest money in different IPL fantasy leagues according to your budget and you can win money daily.

Dream11 is India’s biggest fantasy sports platform with 12 Crore+ users playing fantasy sports and it is one of the best partners when it comes to IPL. They have solid partnerships with national and international sports leagues & bodies. They have many reputed Indian and international cricketers as their brand ambassadors. They are also a founding member of the Federation of Indian Fantasy Sports (FIFS). On Dream11, all fantasy players enjoy the best offers and promotions with secure transactions.

Rising internet penetration across the world and smartphone growth are estimated to boost market demand for online fantasy sports. Next-generation 5G technology is expected to enhance the gaming experience for players, transforming essential data transfer speed and infrastructure and strengthening the real-time playing experience of fantasy gaming. Rising investment in 5G infrastructure is projected to create a market opportunity for the online fantasy gaming market. Investment in 5G infrastructure continues to gain momentum due to enhanced network services which will generate more demand for Fantasy App Development among the crowd as they are getting suitable and reliable technology for their game.

Millions of young sports lovers, worldwide, engage in fantasy sports. This number is projected to accelerate rapidly in the near future due to the launch of user-friendly fantasy gaming applications and rising internet penetration.

Fantasy sports gaming has also attracted investors and has secured a decent amount of Foreign Direct Investment (FDI) in India. In fact, in 2018-2019, the market in India gained INR 15,000 Crores, about $15 billion.

According to a recent report ‘Business of Fantasy Sports’ published by the Federation of Indian Fantasy Sports (FIFS) and KPMG, the gross revenue of fantasy sports operators stood at Rs.2,400 crores for FY20 compared with Rs.920 crores in FY19 which reflect the increase.  The Indian Fantasy Sports industry is expected to be worth US$ 3.7 billion by 2024, creating a huge opportunity for new entrants.

In a nutshell, I would recommend you to play this IPL with the best Fantasy App Development Company and it is not hard to believe that Synarion IT Solutions is the best choice among all. With its highly technical skilled developers, you will surely enjoy your game as it never accepts less than the best.

It is always advisable to invest wisely in IPL fantasy cricket. So, bring your focus to this also. First, make research before creating your team that will lead to more safety in the game. Investing in small portions is good advice because then even if you lose the money, it won’t hurt you much. While if you invest huge chunks of money in one particular game, you would constantly be under pressure to choose an IPL fantasy league team that would earn you good returns. So always invest wisely as it will lead you to stand in the safer zone.

So, don’t let a second go even just get your Fantasy App Developed before the biggest entertainment knocks.