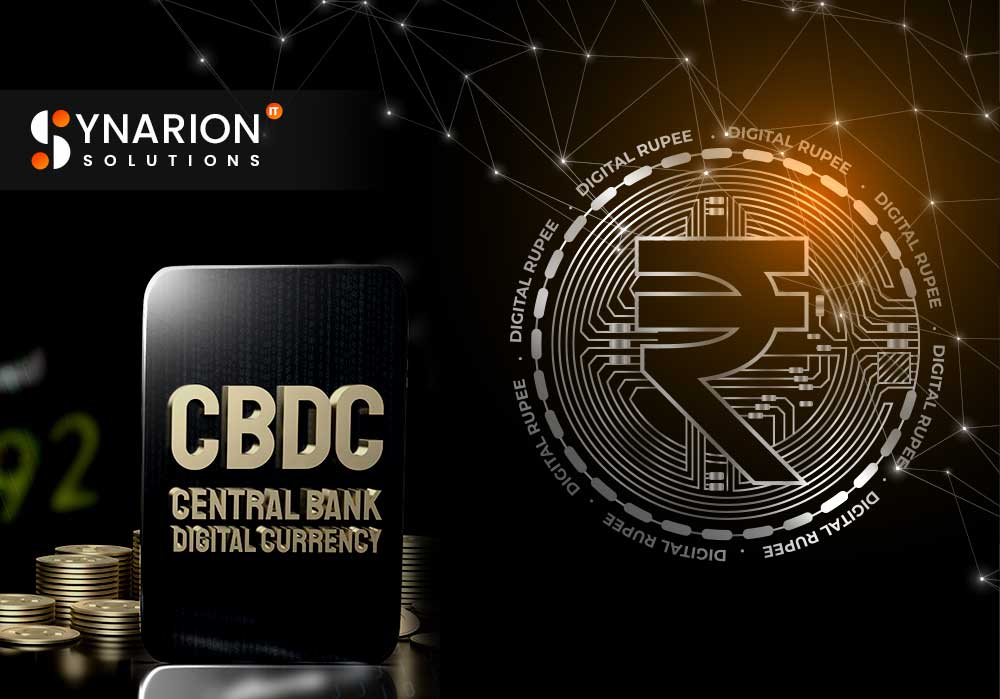 A lot of chaos has been going on, but it’s essential to see the process in which the digital currency will generate and what will be its impact on physical money or if there will be an impact.

Apprehension is the digital currency that the Reserve Bank will generate through a state-of-the-art payment process, aiming to boost the digital economy further, as was said by Rachit Chawla, the CEO & Founder of Finsway FSC.

Regarding its impact on the fiat currency, Chawla opined that the concept behind the launch of the digital currency is only to complement the existing transaction processes and not substitute them.

The Central Bank Digital Currency CBDC will be employed to fix secondary transactions in government securities and will be expected to make inter-banking in the market more accessible and efficient.

Recognizing and cheering this new move, the CEO of BCT Digital, Jaya Vaidhyanathan, explained that the rollout of CBDC is the most sought-after growth since it was announced in the FY23 Union Budget.

Jaya further said that the launch of RBI’s digital rupee marks significant progress in the digital payments sphere. Experts have been apprehending the world’s fifth-largest economy –India’s initiation in this regard, and the RBI has not disappointed. A victorious launch, an expansion, and a rollout of the digital currency are expected to augment the financial requirements and payment of many users while maintaining transparency and low operation cost.

Central Bank Digital Currency, or CBDC, is a digital archetype of currency notes that the central bank generates. Where most Central Banks across the world are still discovering and exploring the generation of the CBDC, the primary motivations of its issuance are particular to every country’s needs.

Digital currency is not substantially different from physical banknotes, but since it is digital, it is more likely to be faster, more efficient, more accessible, and cheaper. The digital currency has additional transaction benefits over other different forms of digital money.

CBDC will be the legal tender that the central bank issues in a digital form, and this situation, India’s Digital rupee will be supported by blockchain technology. The exchange of this currency will be through blockchain wallets. It can be exchangeable with physical government-issued money.

The Reserve Bank of India will also soon initiate the process of limited pilot launches of the e-rupee for particular cases. The expectation is that this e-rupee or digital currency will make possible a deeper understanding and appreciation of the digital rupee and will prepare the public for its usage.

Why is the RBI launching the e-rupee?

In a statement issued by the RBI, it is said that the use of the e-rupee is not only expected to make the inter-bank market scenario more efficient; but it is also said that settling the central bank money would minimize operational transaction costs by preventing the requirement for settlement and reduce settlement risks.

Other transactions and cross-border payments will be the aim of future launches based on the learning from this pilot launch.

Which banks will be involved with this pilot?

There will be nine banks that will be a part of this pilot presently, and those banks are:

The State Bank of India SBI,

These are the banks that are involved in the participation of the pilot.

How does this impact the ordinary person?

The wholesale transaction process and the version of this digital currency directly do not affect the ordinary person. The Central Bank Digital Currency or the wholesale digital rupee is stylized for selected financial institutions with restricted access.

The retail version of the similar is planned for a launch in a month in a few select locations. Everyone, including the private sector, businesses, and non-financial consumers, can use retail CBDC.

The thought behind the Digital Rupee-

The finance minister Nirmala Sitharaman in the Union Budget for 2022-2023, had announced that the RBI would launch the digital equivalent of the rupee in the current financial year. The central banks seek to publicize a more sustainable electronic currency after facing a diminishing usage of paper currency.

The Central Bank Digital Currency is expected to minimize the expense of the issuance of money and other transactions. In the concept note issued by the Reserve Bank earlier, the RBI said that the digital currency would back India’s modern and updated payment systems. This system will make payment transactions affordable, convenient, accessible, secure, and safe.

The e-rupee is expected to boost India’s economy, enhance financial inclusion, and make the payment and monetary systems more efficient.

A system that records data that is impossible to change, cheat and hack is Blockchain technology. On the blockchain, the transactions are copied and distributed to an entire network of devices like a digital ledger.

To make it simpler, this is a technology that helps to store and transact digital currency. Since it is not easy to tamper with, blockchain technology is also the safest method of exchanging money digitally.

Comparison between the digital rupee and bitcoin or cryptocurrency 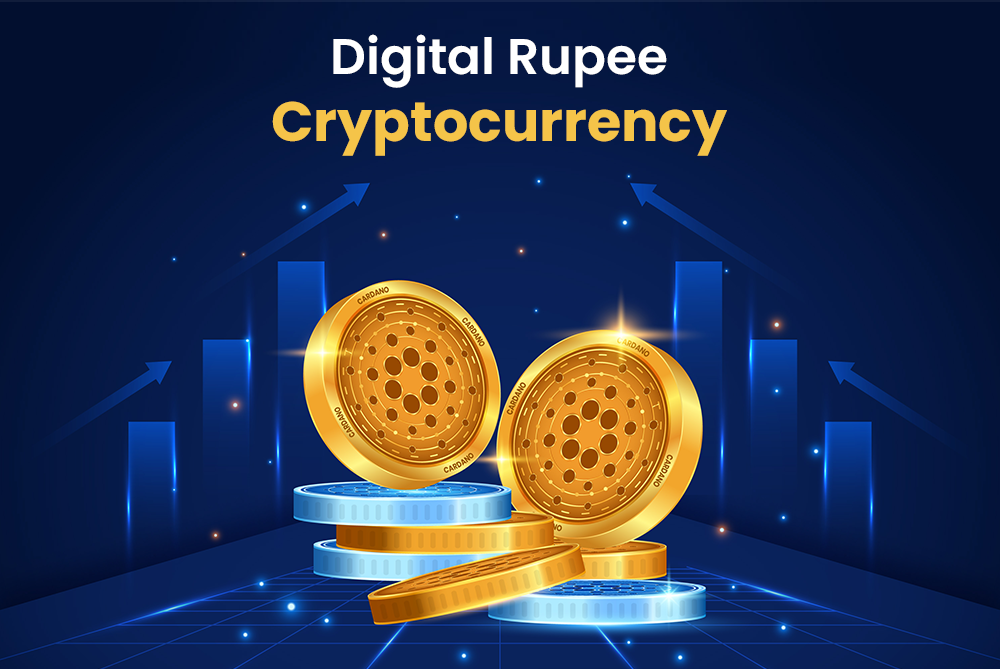 While Bitcoin models CBDCs, there is a considerable distinction. Bitcoin, Doge Coin, Ethereum, and other famous cryptocurrencies depend on blockchain technology, but these currencies lack legal tender status. While these currencies have gained momentum and popularity in India, they are not widely used; their usage is restricted.

Since the digital currency will be backed by the Reserve Bank of India and will uphold the legal tender status, these will be widely and legally accepted across the country.

The value of cryptocurrencies is based on the public’s perception, unlike the Digital Rupee. Since that is the case, the other currencies can fluctuate quickly and drastically, making them unsuitable for storing value.

We have witnessed a large-scale crypto wipeout in the last months, where currencies like Bitcoin and Ethereum have recorded plunging lows.

Also, unlike crypto, which might be used to carry out illegal transactions, a currency like the digital rupee, which has the backing of the Reserve Bank of India, will always be considerably cheaper.

Will the digital rupee be substituted for the physical currency?

The RBI had clarified that, no, the digital currency has no possibility of replacing physical, tangible notes.

The e-rupee aims to complement and not replace the present forms of money and is expected to offer an additional payment option to the users and will not replace the existing payment transaction systems.

Why do we need Digital Currency?

Archit Gupta, founder, and CEO of Clear, explained the need for digital currencies by saying that the Indian Modern Financial process, which includes transactions, securities, communications, etc., has already been replaced with a corresponding electronic version besides the currency notes.

The number of people investing in cryptocurrencies has increased manifold in the recent past. A parallel economy was created by these crypto investors who have forced the government to move towards digitalization and build their digital currency.

Let us look at the benefits of Digital Currency 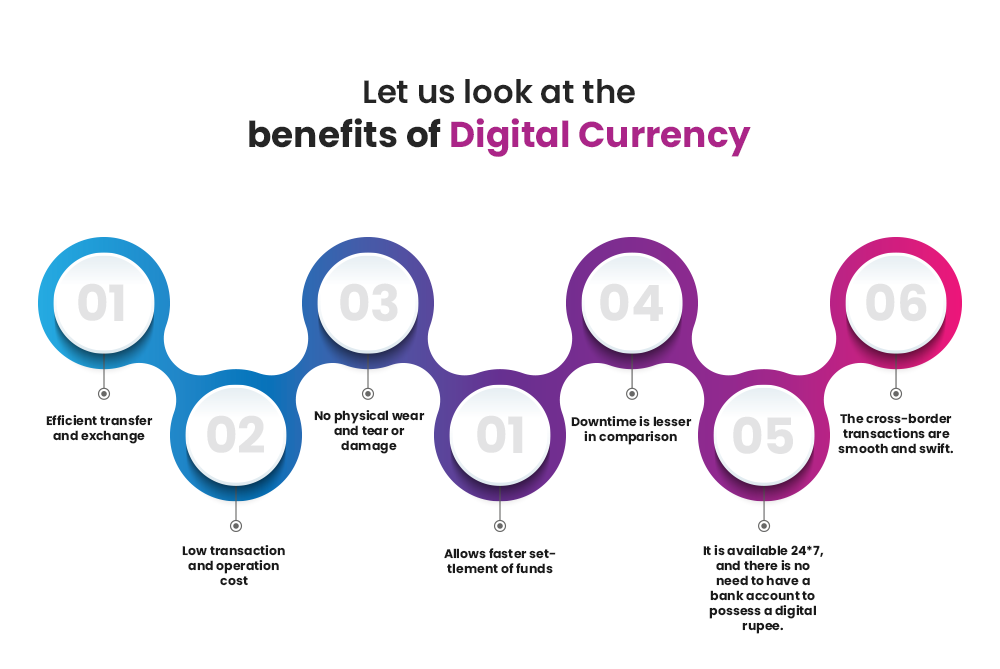 Vishu Gupta, the founder, and director of Nonceblox Blockchain Studio, had opinionated that International commerce can potentially expand because of digital money. The e-rupee could also back financial inclusion and alter how we shop, operate our businesses, and save in ways that are still beyond our understanding. From new forms of e-commerce to programmable money, the digital currency will change the face of digital transactions in India.

The generation of CBDCs will lead to more successful and efficient currency management in the country’s economic system. The Central Bank Digital Currency will be regulated by the RBI, mitigating the risks of volatility in other currencies.

The Digital Rupee might be a revolution since it will revolutionize the fintech spectrum and resolve the numerous and multiple challenges faced while printing and managing the logistics of the physical currency.

Earlier, the Finance Minister announced that the taxation on profits arising from the sale of virtual, private assets at a rate of thirty percent, with no deduction and exemption, meted out to the investor. She further said that the gifting of these assets would be taxed at the hands of the receiver.

The advantages of the CBDCs will be at par with all the other cryptocurrencies and digital payments there are at present. They start with the fact that a digital currency can never go through wear and tear or be burned and damaged physically. There will also be no chance of misplacing and losing them, which is not valid for tangible physical currency. Notes, in comparison, will have a limited life span, while the digital form of money will have an indefinite life span.

Another significant advantage that comes with the use of digital money in terms of cryptocurrencies is the government backing it has. The Digital rupee is governed by a central authority that ensures no volatility risk associated with other digital currencies like the bitcoin. Since the beginning, the Reserve Bank of India has repeatedly expressed concerns about private cryptocurrencies like Bitcoin, Ether, and many others used for money laundering, tax evasion, and terror financing purposes. RBI’s introduction of its CDBC is being viewed as a means of connecting the advantages and benefits with the risks and perils of Digital Currency.

The Central Bank Digital Currency will address the need for digital currency since it is a regulated currency, which means that the Reserve Bank of India has a complete vision of the stock of money for an emerging economy. The total currency’s image and visibility are definite and go very well.

The Chairman of SBI, Dinesh Kumar Khara, has also addressed the issue keeping in mind the inflation front and has offered his guidance by saying that with the introduction of the digital currency, he expects that things will be moving in a better direction and is looking good moving forward. The governor has described the steps required for economic growth and controls of inflation. Finally, it blends pretty well in an emerging economy and a country like ours. It is beneficial for the traction we will require moving forward and competing in the global economy.

The CBDC because of its transparency, low operation cost and the potential to extend the payment transaction systems holds a lot of promises. Across the world CBDC is in its infant stages, building up and developing. The aim and the intent of CBDC and the benefits that come along with it are understood but it is also vital to recognize more inventive methods and resourceful use cases that will make CBDC as alluring as cash is, if not more.